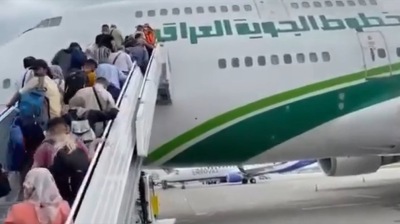 The last of the Middle Eastern migrants that wanted to leave have been flown home as the refugee crisis on the border between Belarus and Poland winds down.
By bne IntelliNews November 30, 2021

The Iraqi government has been sending commercial planes to take any migrant trapped on the border between Belarus and Poland home who wanted to leave in an effort to defuse the crisis there.

More than 2,000 migrants have left voluntarily in the last week and journalists at the border report that less than a 1,000 migrants are left in the warehouse that was turned into temporary accommodation as the first snows fall in Belarus.

“There are still 1-2 thousand migrants in Belarus, but the inflow of new ones has almost stopped after Turkey and the UAE banned citizens of some Middle Eastern countries from boarding planes to Belarus (yeah, it was that simple). So the EU can declare a small victory,” NEXTA editor-in-chief Tadeusz Giczan said in a tweet.

“There’s no doubt that small groups of migrants will keep coming to Belarus to get into the EU (call it the new normal if you like) as long as Lukashenko remains in power. But we have managed to avoid a large-scale artificial humanitarian crisis, and I think that’s what counts,” Giczan added.

Despite the migrant crisis winding down there are still reports of migrants attempting to cross the border, albeit few incidents that involve smaller groups.

Polish Border Guard spokesperson Anna Michalska said about 50 migrants tried to cross on the evening of November 29, with 18 briefly making it across the barbed wire barrier before being detained.

Another group of similar size gathered but ultimately gave up an attempt to cross at another location.

"There are repeated attempts to cross the border and they will continue," Stanislaw Zaryn, a spokesperson for Poland's special services, told reporters.

The Polish border guards remain on high alert and have left the bulk of their reinforcements in place.

Humanitarian agencies say as many as 13 migrants have died at the border, where many have suffered in a cold, damp forest with little food or water as winter sets in.

The EU also continued to beef up its policy response to the crisis. Ursula von der Leyen told the European Parliament last week that thousands of migrants remain at the border. She said the 27-nation bloc stands in solidarity with Poland, Lithuania and Latvia, who are bearing the brunt of what the EU says is President Alexander Lukashenko's ploy to engineer a crisis by flying in migrants into Belarus and then pushing them across EU borders.

"It is the EU as a whole that is being challenged," von der Leyen said. "This is not a migration crisis. This is the attempt of an authoritarian regime to try to destabilise its democratic neighbours."

To deter intermediaries transporting migrants to Belarus from helping Minsk, the EU would create a blacklist of travel companies involved in trafficking and smuggling of migrants, she said.

It would provide the EU with a legal tool to suspend or limit the operations of companies, or even ban them from the EU if they were engaged in human trafficking, according to EU Commissioner Margaritis Schinas.

"This is not a migration crisis, this is a security crisis," Schinas noted. According to the EU, over 40,000 attempts to enter the EU via the Belarus border were prevented in 2021.

Belarus hackers behind the Ukraine cyberattack, Russia arrests ransomware hacker at US request
Lukashenko and Xi Jinping hold telephone conversation praising future co-operation
Belarus in Focus releases its annual review of the political situation in 2021 and its forecasts for 2022