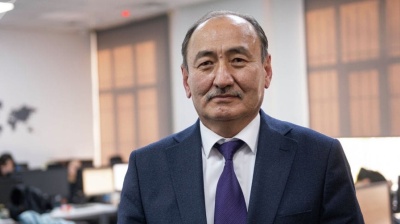 On May 16, one day after Alymkadyr Beishenaliyev flew to Germany on what was billed as a working trip, several of his deputies summoned a press conference to complain publicly about their boss and demand his dismissal.

They weren’t there to speak about how Beishenaliyev had caused a danger to the public by recommending that people drink brews made from the roots of the poisonous wolf's-bane plant to ward off COVID-19. Neither were they exercised by Beishenaliyev’s unseemly confrontation with the owner of an eye clinic, which culminated with the minister trying to block access to the facility by dumping a giant pile of sand in front of the entrance.

The minister, they complained, is rude to his staff and threatens physical violence against anybody who disagrees with him.

“Alymkadyr Beishenaliyev has disrespected everybody,” Deputy Health Minister Zhaparkul Tashiyev complained. “A civil servant should not do the things he does. Many people are unhappy. Many people are talking about this. We are concerned by the minister’s behaviour. He threatens people when they answer back. He says that we won’t make it home.”

Another deputy minister, Ulukbek Bekturganov, recalled the time that Beishenaliyev taunted him by publicly questioning his virility.

“He said: ‘Why don’t you give your wife to my younger brothers.’ And he didn’t say this in person to me, but over the speakerphone. When he called, he had his secretary and other people standing next to him,” Bekturganov said.

Another speaker at the press conference was an orthopaedist called Rahman Azhikulov, who briefly held the position of deputy director of a joint Turkish-Kyrgyz-run hospital in Bishkek. Azhikulov, who moved to Kyrgyzstan from Kazakhstan, claimed that he paid Beishenaliyev a $10,000 kickback to get the job in November, only to be fired a couple of months later.

“He told me about how there was this new Kyrgyz-Turkish hospital and they couldn’t get it up and running for the longest time. I was involved in opening it, I worked on it for four months. After that, there was a supposed rotation of personnel. The minister said that Kyrgyzstan wasn’t Kazakhstan and that jobs had to be paid for. I agreed to that and paid the money,” Azhikulov said.

Beishenaliyev has come out of his corner fighting. He denies all the accusations and says that his deputies are just incompetent drunkards. Talking to news website Kloop, he insisted that he was backed by 99% of the country’s medical personnel and that they want his deputies to quit.

“I’ve already fired them. They’re fighting for their place. If I had been there, they wouldn’t have had the guts to [summon the press conference],” he said. “The three of them are just getting together for a booze-up.”

But disgruntled colleagues aren’t the only problem. On May 14, one day before Beishenaliyev flew to Germany, the State Committee for National Security, or GKNB, detained the director of a clinic in the city of Karakol on suspicion of accepting 100,500 som ($1,250) in bribes from other doctors. When the woman was accepting the bribe, it is alleged, Beishenaliyev's personal adviser, 29-year-old Meerim Tilekova, was by her side.

Beishenaliyev has a story for that too. He told 24.kg news website that the money was not kickbacks but a whip-round to pay for grand celebrations to mark Nurse’s Day on May 12. He claims he dug deep into his own pockets to make the festivities a special event.

“I bought a horse for 130,000 som and hired musicians. We started organising things and the GKNB took all the money. What happened is that along with the coordinator for healthcare in the Issyk-Kul region, they also detained my advisor,” he said.

Beishenaliyev says GKNB officers made violent sexual threats to the detained women, saying at one point that they would “put a bottle between their legs.” The minister said he had to rescue a terrified Tilekova from their grasp and take her to her mother’s house.

Incensed by this intervention, the GKNB posted five officers outside his home the next day, but he scaled a wall and went to the office as normal, Beishenaliyev claims. According to his elaborate tale, he again defied them by later returning home by the front entrance, but then once more climbed over the wall and got a ride to the airport.

This time, the GKNB knew to intercept him at the airport. After a brief exchange, they allowed him to leave for Germany, the minister said.

“I called the head of the GKNB in the Issyk-Kul region and said that I would bring the women back once they fired the officers who threatened to put a bottle between their legs,” he said. “[In the airport], I explained everything that had happened. They said I would have problems because I refused to bring them my advisor. I said let her parents do it. I did what I needed to do.”

Despite the minister’s efforts to protect Tilekova, she was detained in Bishkek on May 17 and taken back to Karakol. Shortly after that, a video montage of images showing Beishenaliyev and Tilekova together, clearly as an amorous couple, not just work colleagues, began to circulate on social media. Online commentators noted that it was possible, not to say highly likely, given the timing, that the GKNB had obtained the photos from Tilekova’s phone and disseminated them in a fresh attempt to smear Beishenaliyev.

Beishenaliyev says he will return to Kyrgyzstan, regardless of whatever threats are made against him.

Noncooperation is very much Beishenaliyev’s brand. In an interview with the newspaper New Faces earlier this month, he recalled the time that doctors told him that an injury he had sustained on a building site would keep him away from work for two months. He illustrated the point by lowering his pants and showing the journalist the injured spot on his leg. Without pausing to lift his pants back up, he continued talking about his back-up plans for the future were he ever to lose his job.

“After I am done with the ministerial post, I want to leave, I am already getting invitations from Russia and Turkey,” he said.

That Beishenaliyev has managed to hold onto his job this long speaks to the depth and loyalty underlying his friendship with President Sadyr Japarov. The minister claims he played a key role in getting Japarov to where he is today. In an interview in January, he talked about how he and his colleagues were in constant communication with Japarov, who was at the time in prison serving time on kidnapping charges, on the night of October 5, 2020, the day that anger over a contentious parliamentary election spilled over into violence in Bishkek.

“He was giving us instructions the whole time. ‘Rise up, go there, get the people together.’ He guided us. When we liberated him on the night of October 5, he took the reins,” Beishenaliyev told journalist Leila Saralayeva.

This loyalty has been amply rewarded. Despite several governments having been formed since that time, Beishenaliyev has always managed to hold onto his seat. This may be his ultimate test.