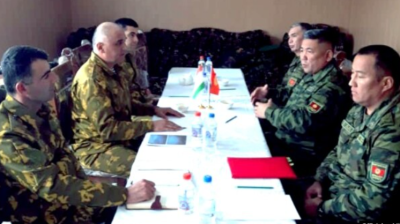 A meeting of border security representatives from Kyrgyzstan and Tajikistan in Batken by the Kyrgyz-Tajik border in December 2019. The meeting looked at possible land swaps.
By Kanat Shaku in Almaty April 29, 2021

A row over a disputed water distribution centre appears to have been the trigger for clashes between local inhabitants and the armed forces of Kyrgyzstan and Tajikistan on April 29 that left at least three people dead and more than a dozen people in need of hospitalisation. Late in the day, a truce was agreed by both sides, to take effect from 20:00 local time, with troops to be pulled back and diplomats assigned to resolve matters.

Kyrgyzstan's health ministry confirmed three people, including a 13 year-old girl, were killed, with at least 84 wounded on the Kyrgyz side. Eurasianet cited reports that at least five people were killed in the clashes, with the armed forces exchanging automatic rifle, machine gun and artillery fire. It also referred to dispatches claiming some gunfire and intense artillery fire could still be heard after the appointed ceasefire deadline. 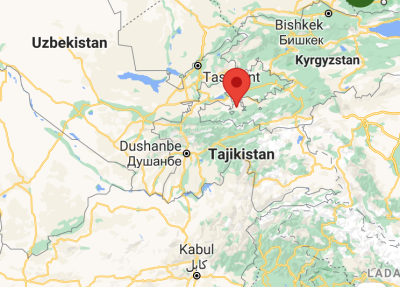 The outbreak of violence on the long contested stretch of the border came after the installation by Tajik officials of surveillance equipment at by a water reservoir and pumping station, known as the Golovnoi Water Intake Facility, located on the Isfara river in a vicinity on the border between Tajikistan’s northern Sughd province and Kyrgyzstan’s southern Batken province, where sovereignty is yet to be defined, RFE/RL reported. Water stress and water access are becoming increasingly sensitive topics in Central Asia.

The conflict began with clashes among local residents. Kyrgyz Deputy Health Minister Aliza Soltonbekova said that 31 Kyrgyz citizens were injured during clashes that began on April 28, one of whom died in hospital.

Tajik authorities said two Tajik citizens sustained gunshot wounds and were taken to hospital on April 29. A day earlier, they said seven Tajik citizens were injured in a standoff that started after residents on both sides of the border clashed, throwing stones at each other.

Videos shared on social media featured the perspective of the Kyrgyz side, showing people sitting in a trench with gunfire heard in the background.

“Additional forces and [equipment] are being pulled together on both sides along the entire perimeter of the Kyrgyz-Tajik state border,” the GKNB’s border service said in a statement.

Disputed segments of the knotting, twisting Kyrgyz-Tajik border are a frequent site of violent clashes between residents and border guards. However, the shootout has taken the situation to a new level.

The fighting comes despite a recent and rare meeting between the governors of the two border provinces, along with the governor of Uzbekistan’s Ferghana Region, on economic cooperation. The business forum, titled “Integration Of Borders – The Key To Development”, focused purely on trade and cultural relations rather than border demarcation, All three of the governors’ provinces share the territory of the agriculture-rich Ferghana valley. The area is also known for having become a major smuggling route since the three countries gained independence after the demise of the Soviet Union. The deadly violence that occurs between Uzbek, Tajik and Kyrgyz inhabitants living along the disputed borders exceeds anything seen elsewhere in Central Asia.

The Kyrgyz foreign ministry on April 24 summoned the Tajik Ambassador to Kyrgyzstan Nazirmad Alizoda to hand him a note expressing concern about “illegal actions” of Tajik authorities on the Tajik-Kyrgyz border who allegedly abducted two Kyrgyz citizens. They were later released.

Earlier in April, Tajik President Emomali Rahmon assured residents of the country’s volatile Vorukh exclave located within Kyrgyzstan that their land would not be part of any land swap deal struck between the neighbouring nations. The statement was a reaction to a top Kyrgyz official publicly stating that Bishkek was ready to include the exclave in a land exchange deal.

Kyrgyz President Sadyr Japarov put out a statement on Facebook calling for calm and for Kyrgyz citizens "to keep their patience and not to give in to provocations".

"With our Tajik brothers, we will always find common ground and solve all issues while preserving and taking into account neighbourly interests on our ancient land. Those who try to ignite a conflict are dangerous. I call on all domestic political forces to be patient in such a complicated time for our nation," Japarov added in the statement.

The Foreign Ministry of Uzbekistan expressed concerns over the rising tensions along the Kyrgyz-Tajik border.