KYIV BLOG: Zelenskiy's party won control of parliament, but now he has to control his party 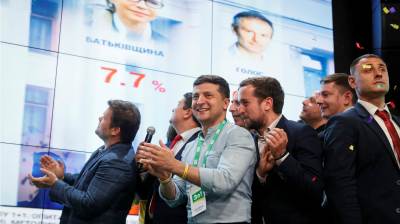 The Servant of the People party is brand new and with over 200 seats will be difficult to control.
By Ben Aris in Berlin August 12, 2019

Servant of the People (SOTP) stomped to victory in the parliamentary elections taking a landslide 43.14% of the votes to win an absolute majority – for the first time ever in Ukraine’s modern history. The new parliament will convene for the first time on August 29, just after Ukraine celebrates its independence day.

But the question remains: can Ukrainian President Volodymyr Zelenskiy, who won his own landslide victory in the April presidential elections, actually control the “party”?

SOTP is not a party. It didn't exist a few months before the vote. It was cobbled together at high speed in the wake of the presidential elections as Zelenskiy needed a party to compete for the Rada seats.

SOTP is a collection of local interest groups and fractions that have been catapulted into power with no unifying underpinning other than the desire to see change. As such SOTP will be very difficult to fashion into a party that Zelenskiy can control and use to push through his own political agenda.

The elections were held according to a mixed electoral system in which half of the chamber’s deputies stipulated in the constitution (225) are elected on nationwide electoral rolls and 199 are elected in single-mandate districts. The missing 26 seats are vacant due to the fact that it was impossible to hold elections in single-mandate districts in Crimea and a portion of the Donbas.

Having won a clear majority solves one of Zelenskiy's biggest problems: according to the constitution the president only has the power to appoint the foreign and interior minister and the heads of the law enforcement agencies. The rest of the ministers are appointed by parliament and Zelenskiy would have no chance of pursuing the radical reform platform he promised in the elections without control of the social, finance and economic ministries. But as head of the party he will now be able to chose his own cabinet.

The most important appointment is who will lead the government as prime minister, who will have real power. Zelenskiy has not named a candidate, but clearly has one in mind as he said the prime minister should be “an economist recognised in the West who has no experience in politics.”

“This reduces the chance of Oleksandr Danylyuk, the current secretary of the National Security and Defence Council, former minister of Finance (following the announcement of election results, he stated that he was not interested in assuming the office of prime minister). However, it increases the chance of professionals such as Vladyslav Rashkovan, former deputy head of the National Bank of Ukraine, who at present serves as Ukraine’s representative to the International Monetary Fund,” said Tadeusz Iwański and Wojciech Konończuk in a paper for the Centre for Eastern Studies (OSW).

“As regards other top posts, it seems likely that Dmytro Razumkov, the official leader of Servant of the People, will be appointed speaker of parliament. Vadym Prystaiko appears to be the prospective minister of foreign affairs. Mr Prystaiko is an experienced diplomat, the former head of the mission of Ukraine to Nato, and the current deputy head of the President’s Office responsible for foreign affairs, OSW added.

However, how this will play out with the 200-plus other deputies in parliament that are nominal members of the president's party is unclear. Almost all of these people, including Zelenskiy himself, are political neophytes and all are highly motivated to make a difference. As the SOTP commands so many seats the deputies are bound to form cliques and align under their various interests and policy goals.

In addition to policy choice, more insidious is the influence Ukraine’s leading oligarchs will wield in the parliament. All of the oligarchs are political and several of them have served as deputies or governors. They all maintain close relations with the organs of government and have bankrolled deputies’ campaigns.

Indeed the biggest unknown is to what extent Zelenskiy himself is in debt to Ihor Kolomoisky, one of Ukraine’s most powerful figures. The support of Kolomoisky’s media outlets was a key factor in raising Zelenskiy's profile to the point where could win the election.

The oligarchs have collectively installed 93 deputies considered to be in their influence. (A list of names and allegiances can be found here.) Kolomoisky has the most with 27 deputies thought to be under his sway and fellow oligarch Dmitri Firtash has 17, although he is currently in Austria fighting against US attempts to extradite him.

The positions of two former major players, ex-president Petro Poroshenko (also an oligarch) and Ukraine’s richest man Rinat Akhmetov, have been considerably weakened, but they are believed to control 28 and eight deputies respectively.

Metals magnate Victor Pinchuk, who is married to the daughter of the first president, has only three deputies at his call.

These deputies could cause Zelenskiy problems as their mentors are not politically naïve. Most of the oligarchs have made a great deal of money from manipulating the government to extract rents and privileges. Presumably they will set their minions to work to protect the state connected business interests they continue to maintain as well as extract new concessions from the new government.

KYIV BLOG: What’s to be done about those who are to blame in Ukraine?