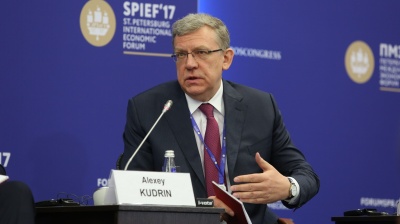 Former finance minister and now head of the Audit Chamber, Kudrin has called on the government to hold off on tax hikes and restart the privatisation programme instead
By Ben Aris in Berlin September 24, 2020

The Ministry of Finance has just released a new budget for 2021-2023 that includes several tax increases, as it is on the hunt for savings and fresh sources of revenues to pay for both its anti-coronacrisis stimulation package as well as funding the implementation of the 12 national projects.

A raft of new taxes are being discussed. The beginnings of a progressive income tax have been suggested – the first change to personal income taxes in 20 years. The double taxation treaty with Cyprus has already been changed, which is designed to drive Russian companies back onshore where they will have pay taxes, whereas previously they paid no taxes to Russia thanks to their Cypriot legal domiciles. And there are big changes to the mineral extraction tax (MET) that hit raw material producers with more targeted taxation, penalising them if they don't invest into developing new projects, amongst other initiatives.

However, instead of raising taxes the Russian government can boost revenue by privatising large companies, Kudrin suggested on September 22, and earn RUB200bn-300bn a year from the sales over the next five to six years.

The last time Russia tried to re-launch the privatisation programme was in 2008, when the newly elected president, Dmitry Medvedev, announced an ambitious programme at the St Petersburg International Economic Forum (SPIEF) in the last months of Russia’s boom years. The programme was designed by liberal economist Sergei Guriev from Russia’s Higher Economic School and accepted wholesale by the Kremlin. But by 2013 Guriev had fled Russia after he was caught up in an Investigations Committee probe into corruption and became the chief economist at the EBRD before moving to Paris, where he now lives in self-imposed exile.

That privatisation programme marked the peak of the Kremlin’s flirtation with adopting a liberal economic model. The 2008 global financial crisis that hit that September killed off those plans and plunged Russia into a fresh economic crisis and growing repression it has never recovered from.

Since then, the privatisation programme has earned Russia a pittance. Last year assets worth RUB4.2bn ($55mn) were sold in privatisations, reports BMB Russia. And while reports emerged this summer that the Finance Ministry (MinFin) planned to decrease the number of state-owned firms from 1,465 in 2020 to 961 in 2025, there has been little actual progress. The government continues to pay lip service to the privatisation programme, but there is little action.

Kudrin’s comments come shortly after the Audit Chamber released a scathing report about Russia’s SOE management, which argued that the situation is so bad the government doesn’t even know how many state-owned firms there are. While the Kremlin has been cracking down on corruption amongst the SOEs, it is still struggling to effectively manage them and they are drain on the budget.

Sberbank CEO German Gref has also chimed in on the same theme. In an interview with state television this week, Gref said he thinks the last step the government should take is to raise taxes. Liberal economists are arguing that given Russia’s stagnant economy, taxes should be cut, not raised, to stimulate more growth.

Russia has massive currency reserves of more than $600bn, a large part of which are in the National Welfare Fund (NWF), which was specifically set up to support budget spending in times of economic hardship. At the same time, it has government debt of only 15% of GDP and could borrow heavily without putting strain on the economy. But instead the Kremlin has chosen to maintain what is in effect an austere budget policy in order to maintain those currency reserves, which are seen as a strategic, not economic, asset in the Kremlin’s showdown with the West.

Gref said rather than raising taxes he would prefer to see a reduction in spending instead. “When we actively hike taxes, we don’t achieve economic growth,” Gref explained. In particular, the Sberbank CEO thinks the new tax on bank deposits, which is starting 2021 and will tax interest on deposits over RUB1mn at 13%, is a poor idea – though he concedes that it will affect just 1-2% of Sberbank depositors.

The Kremlin is unlikely to follow through on Kudrin’s suggestions, as it is not clear who would buy into Russia’s SOEs. While there was a net inflow of foreign direct investment into Russia last year of $32bn, a huge jump from the previous year’s exceptionally weak numbers, FDI remains low and with the political risks due to the threat of new sanctions mounting thanks to the poisoning of anti-corruption blogger and opposition activist Alexei Navalny as well as Russia’s interference in Belarus, few foreign investors are likely to be interested in new privatisations.

In the meantime, the MinFin has clearly launched a major new drive not just to hike taxes, but to streamline the majority of Russia’s overly complicated tax code. The side-effect of the major economic shocks Russia has received in the last 12 years is that it has been driving major deep and effective reforms to Russia’s financial system, even if it has affected other parts of the government as much. Amongst the achievements was a major overhaul of the tax service by Mikhail Mishustin, who was promoted to Prime Minister at the start of this year.

Most recently a debate over changes to the taxes on oil production began in earnest on September 22 as the Duma passed changes to the key mineral extraction tax (MET) in the first reading. Part of the changes will mean that more and more oilfields will be moved to the Excess Profits Tax (EPT or NDD) regime, unless companies can show they are actively investing in the field to further develop it.

There has been a flurry of press releases and conference calls with investors this week as companies appraise how each of them will be affected by the new tax code.

Gazprom Neft warned that taxation changes could harm oilfield services, equipment manufacturers and regional budgets, not just oil companies. Company representatives stated that negotiations are ongoing, and that it’s too early to make any concrete observations, and hopes a compromise solution can be found, BCS GM reported.