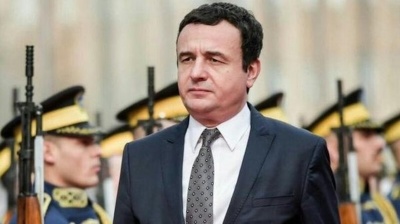 By Valentina Dimitrievska in Skopje March 18, 2020

Veliu, who comes from the ranks of the LDK, was dismissed after clashes over whether the country should declare a state of emergency to prevent the spread of the coronavirus (COVID-19), the government announced on March 18.

Regarding Veliu’s sacking, the prime minister said Veliu was sacked for making statements against official government positions on declaring a state of emergency, as well as spreading panic over the epidemic in Kosovo.

“Through his public statements Veliu has undermined the work of the government,” Kurti said in the statement.

Late on March 17, Kosovo’s President Hashim Thaci proposed the country’s parliament declare a state of emergency, but Kurti believes that such a measure is not needed.

Veliu, speaking on TV Klan Kosova, opposed the prime minister saying that his party supports the president’s position that the authorities should declare a state of emergency immediately as the number of coronavirus cases is rising quickly.

Mustafa said that the Veliu’s dismissal is unacceptable and represents a breach of the coalition agreement with Kurti’s Vetevendosje.

"The prime minister's unilateral actions are harmful and unacceptable and lead to a breakdown of the coalition," Mustafa said in a Facebook post.

Meanwhile, the government announced that until the appointment of the new minister, all decisions within the ministry will be taken by the current Deputy Minister Xhelal Svecla.

This is the second major disagreement between the coalition partners. The first was related to lifting the 100% tariffs imposed on Serbian and Bosnian goods, as the LDK supported an immediate and complete removal of the tariffs while Kurti proposed conditional and gradual lifting.

According to Mustafa, the government led by Kurti is jeopardising relations with the US, which has repeatedly called for the tariffs to be lifted, and has warned of troop withdrawals from Kosovo.