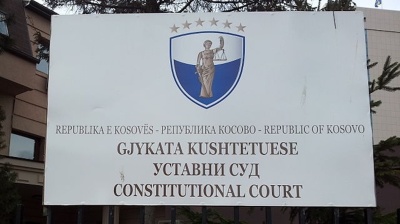 By Valentina Dimitrievska in Skopje May 3, 2020

The move deepened the political crisis in Kosovo, after the government led by Vetevendosje’s Albin Kurti was ousted on March 25 when it lost a no-confidence vote triggered by his coalition partner, the Democratic Alliance of Kosovo (LDK), after the two parties clashed on key issues.

The decree issued by President Hashim Thaci was suspended until May 29, as the applicant (Vetevendosje) claimed that it is against the constitution, the Constitutional Court said.

The decree was signed by Thaci on April 30 after he sent repeated calls to Vetevendosje to propose its own PM designate, to which the party did not respond. That was seen by the president as a refusal to put forward a candidate.

Thaci said in a statement on April 30 that after Hoti proposes his cabinet the government could be voted in by the parliament in the coming days.

Kurti welcomed the decision of the Constitutional Court but said that it is not a final decision.

"The Constitutional Court's decision does not prejudge the final decision, so let's not get excited," Kurti said.

Vetevendosje argues that Thaci violated the constitution by giving a mandate to the second ranked party in the October election, the LDK, and said that the only constitutional move following the no-confidence motion is holding new elections.

The LDK, which seeks to form a new government in coalition with several opposition parties, also said it will fully respect the Constitutional Court's decision.

However, the party added it remained committed to forming a new government in accordance with the constitutional norms and that it has secured the necessary parliamentary majority for this.

Following the highest court’s decision, Kurti also asked the Venice Commission for an opinion on the authority of Kosovo’s president to nominate a candidate for prime minister.

According to Kurti's statement, the Venice Commission's opinion would serve to strengthen democracy and constitutional law in the country.

Meanwhile, a group of members of the European Parliament (MEPs) urged Kosovo’s politicians not to use the global coronavirus (COVID-19) pandemic for political manoeuvring “that would damage the country, its reputation and the path to democracy and freedom.”

The 15 signatories, mainly MEPs from Germany, Austria and Switzerland, warned that the current political situation in Kosovo risks escalating. They claim that confidence in the political leaders attempting to form a new government has been lost both domestically and internationally.

“The rapid formation of the new government in the midst of the coronavirus pandemic threatens to further undermine the country’s still fragile institutions,” the MEPs said in a Facebook post.

They also warned political leaders to refrain from signing an agreement between Serbia and Kosovo quickly if it threatens to jeopardise the stability of the region.

“This would be particularly the case if the agreement provided for an ethnic-geographical exchange of land between the countries. An agreement of any kind must enjoy the support of the population and strengthen the rule of law and democracy beyond ethnic borders,” MEPs said.

Kosovo unilaterally declared independence from Serbia in 2008 following a war in 1998-1999. Pristina and Belgrade are engaged in EU-mediated talks to stabilise their relations, which is crucial for their EU path, which has stalled recently.

The idea of a swap of territories as a solution to the crisis has been discussed, but is strongly opposed by Vetevendosje.