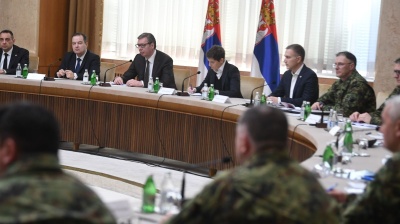 Kosovo and Montenegro have rejected requests by Serbia to open polling stations for the presidential and general elections that Serbia will hold on April 3, angering President Aleksandar Vucic.

In Montenegro, the government has refused to open three polling stations for the presidential and parliamentary elections on April 3, public broadcaster RTCG reported.

The decision was revealed by the pro-Russian Democratic Front (DF) and criticised as an anti-Serb policy. The DF claimed that the government of Prime Minister Zdravko Krivokapic is violating the rights of Serbians living in Montenegro.

Krivokapic’s cabinet said that the decision was taken by Foreign Minister Djordje Radulovic but was not coordinated with the rest of the government. The DF accused Radulovic of attempting to influence internal politics in Serbia.

Radulovic said that he rejected the request as usually additional polling stations are opened only if a large number of voters are expected, which was not the case. Serbians living in Montenegro can still cast their ballots in the Serbian embassy, he said as quoted by RTCG.

“Such a decision is not aimed against anyone because in the same way, in their embassies, citizens of other countries vote – Croatia, US, Ukraine, Russia and many others to whom their national law allows voting abroad,” he said.

Kosovo’s government also declined to allow the opening of polling stations, saying the elections were a matter of sovereignty. Pristina has demanded that Serbia submit a formal request but Belgrade is refusing to do so as it does not recognise Kosovo as an independent state.

Kosovo’s Prime Minister Albin Kurti said that Serbia’s parliamentary and presidential elections to be held in Kosovo, there must be an agreement between the two countries.

Kurti made these statements during a virtual meeting with ambassadors and heads of diplomatic and consular missions of Kosovo.

According to the government press release, Kurti told the ambassadors and diplomatic representatives that "we do not want to deny the right to vote to the citizens of our Republic who have dual citizenship, but at the same time we cannot act against the legality and constitutionality of the country."

The previous day, Vucic said at a pre-election event that "the government of Kurti asked Serbia to recognise the independence of Kosovo, in order to allow the elections” which will be held on April 3.

EU spokesman Peter Stano described the decision by the Kosovan authorities as contrary to Kosovo's commitment to the European path.

Vucic has threatened Podgorica and Pristina with a response that would have far-reaching consequences.

"Expect anything, today the government of Montenegro banned voting in Berane and other places for our elections and that has not been done even by [President Milo] Djukanovic. Kurti's government has asked us to recognise Kosovo's independence in order to organise the vote,” Vucic said as quoted by RTCG.

“[They will receive] a response of serious and responsible people, but it will have far-reaching consequences," he said.

On March 22, Vucic again discussed the issue at a session of the National Security Council and with the ambassadors of the Quint countries, France, Germany, Italy, the UK and the US.

He also added that in the coming days there will be more meetings with representatives of Serbs from Kosovo, as well as with members of the Government, in an attempt to find a solution.

"They are trying to drag us into conflicts, and parts of Podgorica, part of Zagreb, Sarajevo, the whole of Pristina. They want to mark us as someone who is against Western civilization," Vucic added, according to the presidency statement.

The mayor of Strpce in Kosovo's Ferizaj district, Dalibor Jevtic, announced that Serbs in northern Kosovo will hold peaceful protests on March 25 to send the message that “they do not want anyone to deny them basic rights and that they will not be second-class citizens”. Jevtic, quoted in the presidency statement, accused the Kosovan authorities of “institutional violence” and said the decision not to allow the elections to be held in Kosovo is a “threat to human rights”.