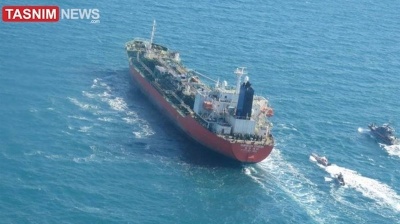 Iranian news agencies including Tasnim showed footage of the Korean tanker being escorted by IRGC fastboats.
By bne IntelIiNews January 5, 2021

Tensions ratcheted up in the Persian Gulf on January 5 as South Korea deployed a destroyer after Iran seized a Korean oil tanker, while the Iranians vowed a “decisive response” to any Israeli move against the Islamic Republic following tough words from Tel Aviv in response to a scaling up of the Iranian nuclear development programme.

Iran may be calibrating aggressive moves so as to give it more leverage in negotiations with the incoming US Biden administration over the dropping of American sanctions while at the same time not triggering US President Donald Trump into military action against the Iranians in the final two weeks of his presidency. Tehran is presently under more pressure to appear defiant as this week brought the first anniversary of the US drone strike assassination of top Iranian general and second most important Iranian official Qasem Soleimani and there are hardliners in Iran who would like to see Iran pursue a revenge with a pronounced impact.

However, Tehran could be walking a thin line—for instance, January 5 brought a report from the Independent that veteran US whistleblower Daniel Ellsberg—of Vietnam War Pentagon Papers fame—believes Trump may have a secret plan to trigger a military conflict with Iran in his last two weeks in office. “I believe, I have very little doubt, there is highly classified planning going on to provoke an Iranian action, a response to our provocation, that will give a pretext to launch an attack as [Trump] has wanted to do for years,” Ellsberg was quoted as saying, adding: “I think people who have access to that [planning], I would encourage, I do encourage you to share that information, not only with the Congress, especially the House, and for press, so that we have a chance of avoiding that [conflict].”

Seoul and Tehran remained engaged in diplomatic exchanges to try to solve the situation with the Hankuk Chemi and its 20 crew. The vessel was on January 5 steered to Iran’s Bandar Abbas port city by the Islamic Revolutionary Guard Corps (IRGC) after it was said to be “polluting the Persian Gulf with chemicals”.

South Korea’s Choi Young destroyer, carrying members of the Cheonghae anti-piracy unit, arrived in waters near the Strait of Hormuz, although Korean officials quickly stressed that there were no plans to conduct a military operation to free the Hankuk Chemi, which was carrying 7,200 tonnes of ethanol after leaving Saudi Arabia’s Al Jubail port.

The South Korean foreign minister, Kang Kyung-wha, said her priority was to “verify the facts and ensure the safety of the crew members”.

Iran was attempting to keep the focus on $7bn of oil sale money frozen in Iranian accounts in South Korean banks because of US sanctions that Seoul claims prevent its transfer to Tehran. An Iranian government spokesman rejected allegations that Iran’s seizure of the tanker amounted to hostage-taking, saying was it was instead South Korea that was holding Iran’s funds “hostage”.

“We’ve become used to such allegations ... but if there is any hostage-taking, it is Korea’s government that is holding $7 billion which belongs to us hostage on baseless grounds,” spokesman Ali Rabiei told reporters at a news conference streamed live online.

Iranian news agencies later ran reports that the stand-off over the tanker might be resolved if Korea used the frozen funds to purchase and send to Iran coronavirus (COVID-19) vaccines. Humanitarian trade with Iran is not subject to US sanctions according to the letter of the law.

The US State Department on January 4 called on Iran to immediately release the South Korean-flagged tanker and accused Tehran of threatening freedom of navigation as a way to extract relief from economic sanctions. “The [Iranian] regime continues to threaten navigational rights and freedoms in the Persian Gulf as part of a clear attempt to extort the international community into relieving the pressure of sanctions. We join the Republic of Korea’s call for Iran to immediately release the tanker,” Reuters quoted a State Department spokesperson as saying on condition that they not be identified.

This week has also seen Iran confirm that it has resumed 20% uranium enrichment at a nuclear facility in Fordow. The move prompted Israeli Prime Minister Benjamin Netanyahu to say that Israel would not allow Tehran to develop nuclear weapons. Iran says it has never sought to construct a nuclear bomb.

Iran’s Nour News quoted an unnamed security official as saying: “This regime [Israel] should be aware that any aggression against Iran’s interests and security from any side and in any way, whether [Israel] admits or denies responsibility, will face a decisive response from Iran.”

Iranian officials said the Islamic Republic now had the capacity to produce up to nine kilograms of 20% enriched uranium per month. Weapons-grade uranium requires 90% enrichment.

“At present, we produce 17 to 20 grammes of 20% uranium every hour,” Ali Akbar Salehi, head of Iran’s Atomic Energy Organization, said according to state media as cited by Reuters. “We have a monthly production capacity of 8 to 9 kg to reach the 120 kg stipulated by the law.”

The decision to enrich to 20% purity was one of many moves mentioned in a law passed by Iran’s hardline-dominated parliament last month in response to the assassination of the country’s top nuclear scientist, which Tehran has blamed on Israel.

The 20% enrichment is a clear breach of the 2015 nuclear deal between Iran and six major powers, from which Trump unilaterally withdrew the US in May 2018. Tehran started violating the accord in 2019 in a step-by-step response to Trump’s move and the failure of nuclear deal signatories France, Germany and the UK to take meaningful action to shield the Iranian economy from Trump’s crushing sanctions.

The future of the nuclear deal may now depend on US President-elect Joe Biden. He has indicated that he is prepared to take the US back into the agreement—a move that would necessarily entail the dropping of heavy sanctions against Iran—if the Iranians return to full compliance with it.

That path looked even more likely to become reality late on January 5 with reports that Biden will name Wendy Sherman as his designated deputy secretary of state. Sherman previously served as under secretary of state for political affairs in the Obama administration and was a lead negotiator for the nuclear deal.

Petrostates to lose trillions of dollars in revenues amid clean energy push: report

US accepts invitation to nuclear deal talks with Iran hosted by EU
Erdogan in spat with US over response to reported Kurdish killing of Turkish hostages
Petrostates to lose trillions of dollars in revenues amid clean energy push: report