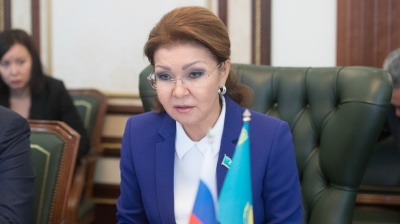 The news flow as to whether Dariga Nazarbayeva is in the running has been contradictory.
By Nizom Khodjayev in Astana April 10, 2019

The country has no tangible opposition in reality with the ruling party Nur Otan (“Radiant Fatherland”) Democratic People’s Party holding absolute power. “Leader of the Nation” for life Nursultan Nazarbayev, who was at the helm of Kazakhstan for three decades until he suddenly stepped down last month, handed his presidential title to Tokayev until the official end of his term in 2020, but essentially kept his hands on the key levers of power behind the scenes.

Nazarbayev’s move was interpreted by bne IntelliNews as the beginning of the real power transition process as the near-octogenarian appears to be attempting to make moves to install a chosen permanent successor—as against interim—while still maintaining his grip on the country. The elections are expected to be rigged in favour of that successor, who will be announced at the next party congress of Nur Otan on April 26 in Nur-Sultan (the capital was lately renamed from Astana in honour of Nazarbayev).

The successorship question in Kazakhstan has been discussed for a very long time but analysts and rumour-mongers alike have narrowed the list of potential candidates.

“Experts immediately started suggesting reasons for Nazarbayev’s sudden departure from office, among which maybe the most significant is fatigue. After three decades as president, Nazarbeyev has done a good job: Kazakhstan is considered the most successful state in Central Asia, but running the country remains а huge challenge. Nonetheless, any other authoritarian leader would never dare to do the same as Nazarbayev,” said Alexey Malashenko of Dialogue of the Civilizations.

Dariga Nazarbayeva
Within Nur Otan itself there are only two individuals who appear to be viable candidates for the presidency. They are Tokayev and Nazarbayev’s 55-year-old daughter Dariga Nazarbayeva. No announcement has been made indicating Tokayev’s true prospects, but the news flow around Dariga on April 9 was full of contradictory reports.

Prominent news website Tengrinews.kz reported that Dariga would not be taking part in the presidential race, citing Dariga’s assistant Saule Mustafayeva. This would be in line with Nazarbayev’s statement in 2017, when he said that his children would not succeed him.

Other news outlets, including Nur.kz, cited Dariga stating directly that the Nur Otan candidate will be chosen at the party congress, without either denying or confirming she has a prospect of success.

It is worth noting that Dariga is currently the speaker of the senate, which constitutionally means that she could take on the reins of the presidency in the event of Tokayev simply deciding to step down. Some believe this to be an indication that all cards are being stacked to her advantage. 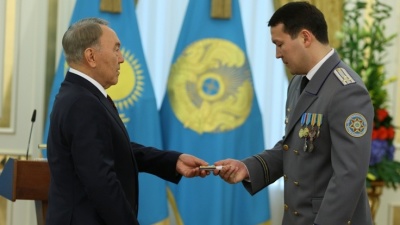 Samat Abish (right) was made deputy chief of Kazakhstan's National Security Committee by Nazarbayev in late 2015.

Rumours circulating online among opposition-minded journalists and ordinary Kazakhs have largely focused on Nazarbayev’s great nephew, 40-year-old Samat Abish, the son of Nazarbayev’s nephew Bolat Satybaldy. A Youtube channel run by Kazakh opposition journalists in-exile, Aydos Sadykov and Natalia Sadykova, posited earlier on April 10 that that the appointment on March 18 of the new prosecutor general, Gizat Nurdauletov, was a move in Abish’s favour. Nurdauletov is supposedly a close associate of Abish’s father. Labelling Abish a “Kazakh Putin”, the Sadykovs argue that the Dariga and Kulibayev clans—Timur Kulibayev, husband of Nazarbayev’s second daughter Dinara Kulibayeva, whom he shares control of the country’s largest bank, Halyk, with, was once seen as the potential next president of Kazakhstan—may not find his candidacy favourable and suggest that Nazarbayev made Karim Massimov chief of the National Security Committee (KNB) in 2017 in order to guarantee Abish a smooth transitional path to the presidency.

That theory echoes that of other analysts who in 2017 wrote that Massimov was given control over the state security services to secure an emulation of the Uzbek succession model. The Uzbek case saw the now former security services head Rustam Inoyatov help bring current Uzbek president Shavkat Mirziyoyev to power following the death of longtime ruler Islam Karimov.

Abish has served as deputy chief of the KNB since 2015 and is currently not a member of Nur Otan. Under law, only nationwide organisations such as political parties can nominate presidential candidates, so unless Nur Otan expedites Abish’s membership within this month, his prospects of becoming the successor would seem unlikely.

Tokayev himself?
Some Kazakh analysts are suggesting that Tokayev himself may run to become permanent president. However, such an outcome would be completely counterintuitive to those expecting a successor to emerge from backstage, especially considering Tokayev’s age. The 65-year-old can hardly be expected to lead the nation for another 30 years. It would also not conform to the tribal component of Kazakh politics, which has dominated Kazakhstan up to this day.

If his candidature is announced, this could mean one of two things. Either Nazarbayev is still postponing the successor question—an unlikely possibility—or the president’s post no longer holds the importance it once did. The latter case would make sense in the light of weakening of the presidential powers in favour of lawmakers and the cabinet in March 2017. That was widely interpreted at the time as a failsafe for Nazarbayev who would in that scenario still retain power over the president, if he were to step down. This would mean that Nazarbayev has decentralised power at the top and decided that the group consensus of the Kazakh elite will be sufficient to keep the country running in his absence.

This option seems to be the least likely of the three.

“These rather significant shifts in Kazakhstan’s internal political environment will impact Central Asia as a whole, and may also affect a range of international initiatives. The transition has already begun. We look forward to seeing its continuation and, of course, completion,” said Malashenko.

Kazakh manufacturing ekes out PMI expansion in May
New coronavirus cases decline across emerging Europe but the epidemic’s not over yet
Borealis pulls out of $6.8bn plan to build petrochemical plant in Kazakhstan