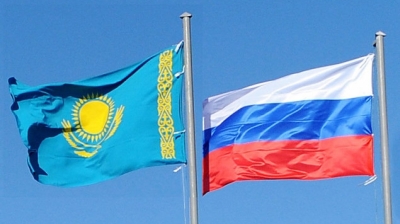 Flagging up problems.
By Almaz Kumenov for Eurasianet April 29, 2021

A Moscow-led bloc designed to ease trade among its members is experiencing more headaches, this time along the border between Kazakhstan and Russia.

Azat Sembinov, a member of Kazakhstan’s lower house of parliament, said on April 28 that he has received reports from businesspeople that more than 300 trucks were backed up at the Syrym checkpoint, near the northwestern city of Oral.

Sembinov attributed the jam to a unilateral tightening of the rules by Russian border personnel. Where border guards previously scanned cargo and allowed it through, they are now insisting on climbing into trailers, requiring a time-consuming unloading procedure, he said.

This is in violation of Eurasian Economic Union, or EEU (aka EAEU), treaties, the lawmaker said.

"Tightening border controls within the EAEU impedes the free movement of goods, causes direct financial damage to businesses and does not accord with the principle of a single economic space," Sembinov said.

Kazakhstan’s neighbour to the south could not be blamed for basking in schadenfreude.

While it is Kazakhstan discomfited this time by what is being described as a flouting of EAEU regulations, its own border guards have for years subjected truckers arriving from Kyrgyzstan, another member of the bloc, to similar treatment. Kazakhs have attributed these problems to unbridled smuggling in Kyrgyzstan.

The National Security Committee had warned on April 24 of the possibility of tightened inspections, which it said were being carried by Russia to detect “prohibited items and materials."

This is not the first time that politicians in Kazakhstan have raised misgivings about perceived Russian violations of EEU obligations. Last winter, Rosselkhoznadzor, Moscow’s food regulator, banned the import of tomatoes and pepper from certain regions of Kazakhstan, citing the discovery of infected vegetables among the imports.

Nur-Sultan undertook its own investigations into the matter and says it found the claims to be unfounded. The EEU’s permanent governing body in March found Russia’s actions to be in violation of treaty rules.

Zhanel Kushukova, the Deputy Minister of Trade and Integration, put the losses caused to Kazakh businesses by that ban at more than 200 million tenge ($480,000).