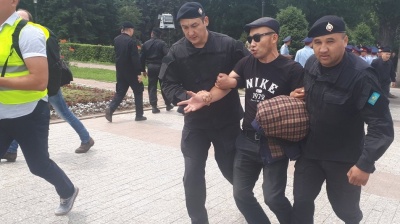 Hundreds were arrested during the election demonstrations.
By bne IntelliNews June 10, 2019

Dozens of videos have been uploaded online by Kazakh activists and election observers demonstrating what appears to be evidence of the falsification of pro-Tokayev votes during the June 9 presidential election that sparked intense demonstrations in Kazakhstan resulting in hundreds of arrests.

Kazakhstan’s Central Election Committee announced preliminary results on June 10 showing that Kassym Jomart-Tokayev won 70.76% of votes cast, while Amirzhan Kosanov took 16.02%. Though that is an unprecedentedly high total for an opposition candidate to score in a Kazakh presidential election, Kosanov’s supporters believe Tokayev received far fewer votes in reality. They have set out to provide evidence that gives at least some indication of the alleged level of vote falsification around the country that prompted protests and a police operation that even produced embarrassing pictures of furious elderly people being detained.

Some Kosanov backers believe the fact that Tokayev only won with around 71% of the vote—predecessor Nursultan Nazarbayev, who ruled for three decades and is thought to be still exercising power from the shadows, won his elections with more than 90% approval rates—is itself a consequence of Kosanov’s supporters mobilising to prevent voter fraud by signing up to be election observers in their districts.


Another video features a polling station turning off the lights during the vote count, a move seen as preventing observers from seeing what the polling station was up to.

Another video related how a video of a woman telling a polling station representative that someone had used fake signatures to vote on behalf of her registered family members, who could not make the polling station that day.

On the more positive side, a video uploaded on YouTube depicted the head of District 22 polling station in Nur-Sultan reading out the results of the vote count, according to which Kosanov received 537 of the votes, while Tokayev got 466.

Social media, mobile internet blocked
Many such videos have been circulated on social media apps including WhatsApp and Telegram. The Kazakh government appeared to be blocking Telegram for the entirety of election day and the app was not working on the afternoon of June 10 either. The mobile internet in Kazakhstan has been down all day.

A preliminary statement made by the observation mission of the Organisation for Security and Cooperation in Europe (OSCE) on June 10, appeared to back claims of the Kazakh opposition.
The OSCE said Kazakhstan’s presidential election was harmed by violations of fundamental freedoms, including crackdowns on public protests and irregularities on election day.

“The election took place in a political environment dominated by the ruling party and that limited critical voices,” the statement said. “At the same time, irregularities on election day and a disregard of formal procedures meant that an honest count could not be guaranteed.”

“Wake up, Kazakh!”
As disappointment spread at the prospect of the Nazarbayev era continuing from behind the scenes, a campaign calling for real change sprung up on social media, using the hashtags #qazaqkoktemi (Kazakh spring) and #menoyandim (I’ve woken up). A new movement called Wake Up, Qazaqstan has emerged from it, calling for democratic reforms.

The “wake up” theme stems from a 1909 poem written during Russian colonial rule. “Wake up, Kazakh! Think, Kazakh! Be, Kazakh!” it reads. “We are a nation that has forgotten its freedom.” The movement is inspired by “a yearning for freedom”, Anuar Nurpeisov, an actor behind the original Instagram campaign, told the Guardian. “This generation is tired of living under the leadership of people who grew up in the Soviet Union.”