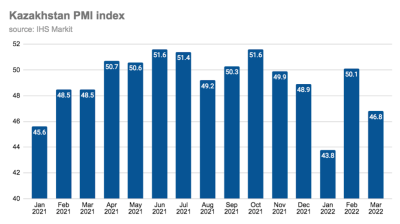 The Kazakh manufacturing sector returned to contraction territory in March as impacts of Russia’s invasion of Ukraine hit Kazakhstan’s economy, according to the latest purchasing managers' index (PMI) survey data from Tengri Partners and IHS Markit released on April 1.

The index posted 46.8 in March, after improving to 50.1 in February following 43.8 in January. The headline Kazakhstan Manufacturing PMI is a composite single-figure measure of manufacturing performance. Any figure below 50.0 represents a deterioration.

"While manufacturers were still largely confident in the year-ahead outlook in March, this was based on hopes that the geopolitical and economic situations will improve soon, something around which there is a great deal of uncertainty," he added.

The accompanying statement to the survey noted that the decline “in new business was substantial and broadly in line with that seen in January when a state of emergency was introduced in Kazakhstan [in response to unrest]” and that the “geopolitical situation also reportedly impacted output, which decreased in March after having expanded in February. Currency weakness and raw material shortages were also factors behind the fall in production.”

Firms also faced a deteriorating availability of inputs in March, which was in some cases caused by the imposition of sanctions on Russia following the launch of its war against Ukraine. Logistical issues with goods from China also contributed to a marked lengthening of suppliers' delivery times.

“With new inputs difficult to secure, manufacturers used existing holdings of materials to support production. As a result, stocks of purchases decreased sharply, and to the greatest extent on record. Similarly, stocks of finished goods also decreased at a faster pace at the end of the first quarter,” the statement said.

IMF says war in Ukraine, inflation and energy crisis pose challenges to Serbia’s economy
17 hours ago
Poland’s unemployment rate falls to lowest point since 1990
1 day ago
Hungary’s jobless rate inches down to 3.5% in May
4 days ago
Polish retail sales growth eases to 8.2% y/y in May
5 days ago
Ruble rises to seven-year high, best performing currency in the world
6 days ago