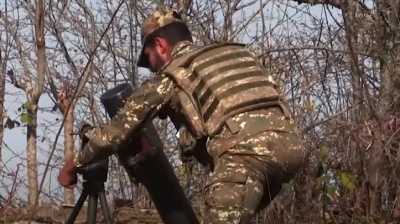 The Nagorno-Karabakh war “may be moving towards a potentially bloody battle for the city of Shusha (which Armenians call Shushi) deep inside the territory” with Azerbaijani forces reported to be no more than 3-4 kilometres away from the mountain fortress city, a Carnegie Europe analyst warned on November 5.

Thomas de Waal, a scholar and writer on the Caucasus at the think tank, added on Twitter: “A week ago the push was towards Lachin between Armenia and NK. A switch to Shusha may make less sense militarily but has political significance. To see their flag over the high citadel of Shusha appears to be the No. 1 objective of Pres. Aliyev [Azerbaijani President Ilham Aliyev] and the Azerbaijani public.”

And he noted: “Shusha has great meaning in Azerbaijan as the birthplace of poets and composers. It was their town in Karabakh before the [1988-1994] war, with an 85 percent Azerbaijani population.”

Video footage pointed to by de Waal which shows a Russian Anna News Agency reporter in Shusha/Shushi on November 5.

Baku's aim, said de Waal, might be to attempt the recapturing of Shusha soon, before winter weather comes. “However, Shusha is a cliff-top citadel, very hard to capture. In 1992 it fell to Armenians mainly because Az. units just abandoned it.”

Shusha sits above Stepanakert—the capital of the self-proclaimed republic of Nagorno-Karabakh, controlled by ethnic Armenians but internationally recognised as part of Azerbaijan—and also has great strategic significance for the Armenians, the analyst said, adding: “What happens next? One can only say with some certainty that given the geography a new phase of the conflict deep inside Karabakh itself is likely to be messy and horrible.”

The failure of diplomacy to end the month and a half-long conflict that is sure to have claimed the lives of several thousands already—though verification of casualties is presently impossible to achieve—was also raised by de Waal, who said: “Diplomacy is still missing in action sadly. No predictions then, only to say that outsiders should pay close attention to events around Shusha/i, despite all else that’s going on in the world.”

RFE/RL wrote on November 5 that “A century-old Armenian expression says, ‘Whoever controls the city of Shushi controls the whole of Nagorno-Karabakh.’”