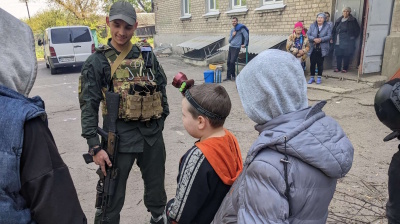 Children from the bomb shelter enjoy a rare day playing outside. / Neil Hauer, bne IntelliNews
By Neil Hauer in Lysychansk May 18, 2022

There are no normal days in Lysychansk anymore, but as far as days go, this one is not so bad.

“The Russians have hardly bombed us today at all,” says Alexandra, a bright-faced 17-year old. “We’ve been able to be outside almost the entire day,” she beams.

For her and the other inhabitants of Lysychansk’s Public School #8 (the number has been changed to conceal its identity, as Russian forces have bombed schools nearby), that constitutes a small triumph amid months of hell.

Lysychansk is an unremarkable city in northeastern Ukraine, 700 km east of the capital, Kyiv. Its prewar population hovered just under 100,000, with most of those employed at local chemical plants. It is in many ways typical of the sort of slowly decaying industrial towns that dot the landscape across so much of the former Soviet Union.

Now, however, Lysychansk finds itself at the center of a great drama.

It is here that Russian forces are attempting to land a decisive blow against the Ukrainian army, or at least a significant part of it. Lysychansk, along with its sister city Severodonetsk (lying parallel to it, across the river of the same name) and a handful of villages, is the only part of the sprawling Luhansk oblast that remains under Ukrainian government control. With Moscow abandoning its designs on Kyiv and much of the rest of Ukraine, Lysychansk is now perhaps the most active front in the country, with Russian troops, backed by incessant artillery and aerial bombardment, slowly pushing back the defenders.

Amidst this carnage, the city has been largely abandoned: most able-bodied citizens have evacuated long ago, heading as far westward as they could manage. For those that remain, many have found new shelters, in safer locations with deep basements. School #8 is one of those.

Its new inhabitants have settled in as best they can.

“We came here on March 25,” says Tatiana Lyachkova, 50, one of the 110 tenants at School #8, speaking on May 12. “There’s no water or electricity here, but we have generators. We don’t have much oil, but it’s enough now that it’s warmer out,” she says.

The amenities that do exist are often unavailable. International humanitarian organisations, which once visited often, have not been to the school in “more than a week,” Lyachkova says. There is one shop still functioning nearby, which opens daily from 7am to 10am, but few have money left to purchase products there: work has obviously ceased, while pensions are no longer being paid.

As she speaks, Ukrainian volunteers nearby unload a cargo of essentials: bread, drinking water, oil, and sleeping bags.

Most of those remaining are in various levels of poor health.

“Probably 80% [of the people here] have some sort of illness or chronic condition,” Lyachkova says. Medicine is in short supply for nearly all of them.

Asked why she herself stayed, Lyachkova gives a wry smile.

“Somebody had to,” she says.

She, along with everyone else, lives underground: in the humid, squalid conditions of the school basement.

A passageway leads down past the school’s entrance towards a long-disused bunker. Dust hangs heavy in the air, the darkness broken only by the occasional candle or a mobile phone flashlight down a corridor. Beds are crammed closely together, forming two thick rows lining each wall of the main underground chamber. Preserves and other non-perishables lie on tables: jam, pickles, cans of stewed meat. One woman sits silently, preparing sandwiches for the children playing outside. The musk of too many people living too closely together permeates the room.

In a side room, a handful of small wells reach a water source somewhere far below: the water is not suitable for drinking, but will wash dishes well enough, Lyachkova says. Next to it are the latrines, their contents emptying into a septic tank too close beneath the surface. The smell overpowers almost instantly, burning one’s eyes.

It is little wonder most of the inhabitants relish their rare trips outside.

“We didn’t leave the basement for almost one entire month,” says Daniil, a 16-year old student at the school. “The shelling was too heavy. Today, for some reason, it’s light,” he shrugs.

The reason is not a comforting one. The previous night, Russian troops took the town of Rubizhne, on the other side of the river from Lysychansk. Their low activity today – an extremely relative statement, given the regular booms of shellfire in the near distance – owes to most of their efforts going towards repositioning and restocking their forces for the next assaults.

School #8 has been spared the worst of the violence – but not all of it.

On the top floor, the remnants of fire extinguisher foam coat the floor, a slick, drab brown. The wall of one room lies caved in, its bricks scattered across the ground, along with the culprit: a shell that smashed into it.

Daniil grabs a piece of the shell, part of its casing. “It started a fire, but we [the men in the shelter] ran up here and were able to put it out,” he says.

The shell hit on March 8, International Women’s Day – symbolism that is not lost on Alexandra.

School #8, fortunately, was built for such things.

Lysychansk, like the entirety of Ukraine, was conquered by Nazi Germany in 1941, as the Wehrmacht plunged into the Soviet Union. Two years later, it was retaken by the Red Army. They made it into a base of operations, constructing a military hospital here in 1943, one that would, at the war’s conclusion, be converted into a school: School #8.

“We are fortunate in that way,” says Daniil. “The [Russian] mortars are always working. Always. At least [the Soviets] were prepared for this to be bombed,” he says.

Out in the courtyard beneath, a group of the younger children play. Three of them chase each other in a circle, wielding toy airplanes in a mock display of what is happening in real time in the skies above Ukraine. One of them, an enthusiastic boy with a toy headlamp fastened around his head, is Alexandra’s brother, eight-year old Kirill.

He has adjusted as well as possible to the new reality.

“I don’t really think about it,” Kirill says, when asked about his new life here. “It’s already normal for me.”

His smile slips for a second.

As the volunteers pack up, Zhenya, one of the soldiers escorting them, reveals some details behind the calm. He himself participated in the battle for Rubizhne, which ended with his unit and the rest of the Ukrainian troops being forced out of the town the previous night.

“We are preparing the new positions in Severodonetsk,” he says, of the one town that still lies between Lysychansk – and School #8 – and the enemy. “We hold it now, but the battles will be hard. The Russians are coming.”

Kremlin VTB bank to be hit by investor class action for seizing foreign shares
6 hours ago
Russian metal giants Rusal and Norilsk Nickel could merge under sanctions
6 hours ago
US and Chinese slowdown will tip the world into recession, says IIF
3 days ago
NEO: Rising in the East, Setting in the West: Russia strengthens trade with Global East
5 days ago
Stagflation fears continue to rise
5 days ago