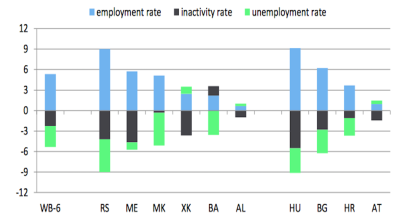 Structure of the working-age population (15-64 years) from 2Q17 to 2Q18, change in percentage, in Western Balkans and EU peer countries.
By Denitsa Koseva in Sofia March 19, 2019

Although labour markets continued to improve in the Western Balkans, this trend slowed its pace in 2018, according to a report released by the World Bank and the Vienna Institute for International Economic Studies (wiiw) on March 19.

“Improvements in labour market performance are encouraging, but the decelerating trend raises some concerns,” Linda Van Gelder, World Bank director for the Western Balkans, was quoted as saying in a press release announcing the report.

“We still need a stronger private sector that generates adequate jobs and public policies that improve employability of the workforce to sustain labour market performance in the future,” she added.

Albania and Montenegro posted the strongest employment growth in 2018 (3.3% each), followed by North Macedonia (2.1%).

“On average, regional labour markets recorded improvements in activity rates (up 0.5 percentage points to 62.8 percent) and employment rates (up 1 percentage point to 52.9 percent), but they remained far below European standards,” the report noted. Most new jobs were created in industry and services.

At the same time, unemployment reached a historically low level in most of the countries, reaching average 15.3%. The lowest level of around 12% was registered in Serbia and Albania, while the highest was in Kosovo (around 29%).

“Still, unemployment remained a significant challenge in the Western Balkans, where levels were two to three times higher than in EU peer countries,” the report noted.

At the same time, informal employment remained one of the main challenges in the Western Balkans, posting growth in Albania and North Macedonia, while falling in Serbia. Most informal jobs were held by young men, elderly women and low-educated workers.

Youth unemployment fell in 2018 by 3pp to 34.6%. However, most young people were long-term unemployed, ranging from almost 70% in Bosnia & Herzegovina to 43% in Montenegro. Of the employed young people around 50% worked on temporary contracts with the highest share of 80% registered in Kosovo and Montenegro.

Real wages in Ukraine dropped 0.4% y/y in April, after growing 9.3% y/y in March
1 hour ago
New coronavirus cases decline across emerging Europe but the epidemic’s not over yet
8 hours ago
COVID-19 lockdown results in collapse of Lithuanian retail sales in April
2 days ago
Russian retail sales down by a quarter year on year in April, as unemployment soars
2 days ago
Ukraine’s real wage gains still positive but fall in dollar terms in March
2 days ago