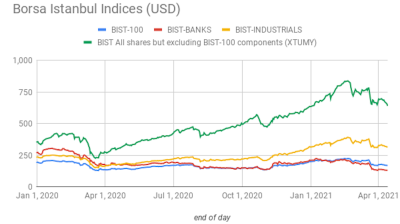 Dogan, among the Istanbul stock exchange speculators since the beginning of the 1980s when it was the dominant power in Turkish media, is set to sell 160mn existing shares at a fixed price of Turkish lira (TRY) 5.06. Galata Wind’s TRY535mn paid-in capital will remain unchanged.

This year, IPOs on the Borsa Istanbul have become the leading market anomaly in Turkey. In recent years, global markets have not suffered from a lack of market anomalies.

In 2020, Istanbul-listed small cap stocks offered huge returns and IPOs emerged as the new "kitsch". In 2021 to date, small caps have lost momentum but IPOs have not.

All the held IPOs are for small cap companies and they enjoy huge demand. Generally, owners sell existing shares and take the money, rather than the companies via capital hikes.

Due to huge demand, each participant receives just a few shares. Following the IPO, share prices skyrocket when trading starts on the market.

On April 9, daily Sabah reported that 2.6mn people have bought shares in the Borsa Istanbul IPOs held in the past two weeks.

So far in 2021, a total of TRY1.6bn worth of shares have been sold in six IPOs while TRY39bn worth of bids were booked.

In 2020, TRY1.1bn worth of shares were sold by eight companies in IPOs.

The next up is Aydem Yenilenebilir Enerji, formerly Bereket Enerji, which from April 19-22 will collect bids.

On April 7, granite maker Qua Granite (QUAGR) smashed a record by attracting bids from a total of 846,353 accounts.

On April 8, Dunya reported that 18 companies have announced IPO plans or applied to the SPK in the last one-month period and that around 60 applications are pending at the SPK.

The record for getting locked at the price ceiling following the opening of market trading currently belongs to Turk Ilac (TRILC).

It was for 20 days that Turk Ilac shares were locked at the price ceiling after the share price rose to TRY73.60 from the IPO price of TRY10.

Naturally, the company became a rich source of jokes among the local market crowd. It may have found the elixir for immortality or an undisputed remedy for baldness after its IPO price was set.

At the Turk Ilac IPO, a “United Arab Emirates-based” participant, namely ME Performaa Management Consultancy, appeared. It bought a 7.2% stake. If you do not believe it, you can go to the Emirates to check.

Perhaps the main reason for the Turk Ilac share performance was a good choice of name, given that most real individual investors among the tonnes of “retail” accounts do not even know what the offered companies do.

Turk Ilac sounds like a “native and national” company. It has "Turk" in its name and Ilac means "medicine". The pandemic is raging. What could go wrong?

The company also made sure to mention in its IPO prospectus and in filings with the Borsa Istanbul following the listing that it was “holding some talks to produce a coronavirus (COVID-19) vaccine”.

In December, it bought a 7.7% stake in confectionery maker Kervan Gida (KRVGD) during its flotation. However, its stake was down to 1.87% by end-2020.

In March, Norges bought an 8.3% stake in the Naturelgaz (NTGAZ) IPO.

After the initial lockdown, sales of non-food goods defied the crisis and advanced steadily, posting a 10.8% y/y annual advance in Q1.

Headline CPI jumped to 4.3% year on year in April. The idea that the National Bank of Poland can mimic the accommodative stance of the Fed or ECB is increasingly debatable. In terms of inflation, Poland is closer to the emerging markets.

Russians Services PMI remains a strong 55.2 in April but slowed a little from March, optimism for the rest of the year high

The seasonally adjusted IHS Markit Russia Services Business Activity PMI index slowed a little in April to 55.2, down slightly from 55.8 in March, but remains robustly above the 50 no-change level as services bounce back.

Bucharest Stock Exchange up 15.7% ytd despite modest performance in April

The main index of the Bucharest Stock Exchange, BET, gained 15.7% in the first four months of this year, with building materials producer Teraplast the top performer.

DATACRUNCH: Ukraine starts to close the gap with Russia

Russia and Ukraine are both emerging from the coronacrisis and have had very similar experiences, but as the recovery gets under way Ukraine is beginning to close the gap with Russia.

Romania’s retail sales up 4.1% y/y in Q1
13 hours ago
ING: Inflation pressure continues to build in Poland
14 hours ago
Russians Services PMI remains a strong 55.2 in April but slowed a little from March, optimism for the rest of the year high
1 day ago
Bucharest Stock Exchange up 15.7% ytd despite modest performance in April
2 days ago
DATACRUNCH: Ukraine starts to close the gap with Russia
2 days ago