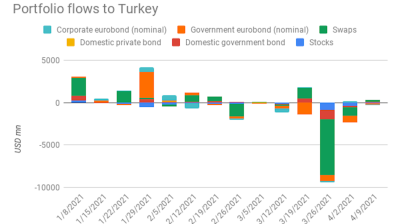 Overall portfolio flows to Turkey— including equities, domestic bonds, eurobonds and swaps—turned to a slight positive of $88mn in the week ending April 9, following the $12bn of outflows observed in the previous two weeks, a period that followed the shock firing of the central bank governor by presidential decree on March 19.

But a health warning: we cannot know the actual origins of these flows, while the figures are only estimates based on official data sets from the central bank and banking watchdog BDDK.

When we detect $9bn of outflows in a week, as was the case in the week ending March 26, we can comfortably conclude that there were strong portfolio outflows during the week in question.

However, when we observe a slight inflow of $88mn, we cannot state with any certainty that the week was not actually neutral or slightly negative.

Liquidity on the lira and Borsa Istanbul markets has dried up, making Turkish assets vulnerable to shocks.

The current account deficit remains a danger that investors will keep in view on the dashboard.

The central bank officially has around $90bn of gross FX and gold reserves, but its net FX position remains in deep negative territory at around minus $60bn. The banking industry has an additional $20-30bn.

The lira loans flow is under close scrutiny. So far this year nothing like the eye-popping levels seen in 2020 has been observed, and local FX and gold demand does not seem to have taken off in the year to date either.

On April 15, the policy rate was held at 19% in line with expectations.

On April 24, US President Joe Biden will most probably decide against describing the mass WWI killing of Armenians by the Turks as “genocide”, with the decision seen as a test of his policy towards Ankara.

The official inflation rate for April will be released on May 3. The official data series still suggests that headline annual CPI inflation will be seen to have risen to a degree.

On May 6, the next rate-setting meeting will be held.

In the fourth week after the sacking of the previous central bank governor, Naci Agbal, the USD/TRY pair appeared stable in the 8.00-8.10 band.

This was partially due to the recent stabilisation in global markets.

The tensions between the Fed and the markets have not dissipated, but a sell-off in US Treasuries, which brought a sell-off in EM currencies, took a break.

One might say that a note from the Turkish service of Reuters on April 16 betrays how global financial markets do not work on news or data flows but according to the sirenic urgings of the dominant players: “Even higher-than-expected retail sales and employment data in the US could not prevent the fall in US Treasury yields.”

The Gods of Money will decide the timing of the next sell-off. Mere mortals might expect “Sell in May, go on holiday” and the traditional liquidity dry-up in August as signposting the next shocks.

It was in November 2018 when crude barriers initially appeared on the chart.

In December 2018, we wrote for the first time how the central bank was intervening when the USD/TRY rate passed the 5.40-level.

In March 2019, Haluk Burumcekci of Burumcekci Consulting detected some unidentified leakages in the central bank balance sheet and he soon enlightened everyone as to what was going on.

Although the mainstream media and finance industry insisted on playing the three wise monkeys for more than two years, Turkish officials have of late been giving their version—with the country mired in a de facto bankruptcy because officials burnt through towards $130bn of reserves—of how they were intervening in the lira market.

The current official story doing the rounds is that the central bank has not intervened in the lira market since November and that the latest heavy sell-off by foreign investors was in local retail accounts.

It was on December 3, 2018 when we first reported that the surprise fall in Turkey’s November inflation rate followed the dismissal of the statistical institute TUIK’s deputy director with responsibility for the inflation data.

Mainstream pundits insisted on telling the Turks to take the data that followed seriously and, after two years, inflation, as well as unemployment, are out of control.

Since January 2020, we have been writing that the “individual” or “retail” accounts on the Borsa Istanbul that have supposedly faced heavy sell-offs by foreigners are not too “retail”.

As time went by, even stakeholders on the Borsa Istanbul started accepting that the accounts were indeed not too “retail”, although no one has come up with an explanation for why that is the case.

It was on March 4, 2020 when we wrote that Turkey’s coronavirus-free status was an untruth. For several months, after officials acknowledged that the country’s outbreak had officially begun, we were then one of a handful of publications that pointed out that the pandemic data put out by the Turkish government was clearly not relaying the true picture, yet throughout those months Turkey kept winning plaudits from the global media for its success in dealing with the coronavirus outbreak and countries including the UK said they were only too happy to advise their citizens to take holidays on the Turkish Riviera.

The “third” wave of the coronavirus (COVID-19) pandemic in Turkey is going hardcore right now. It will inexorably claim its top story status soon.

The sheer amount of rubbish that is written about Turkey being a modern, well-run state, so much so that it has a European Union membership application that not long from now will be taken with all seriousness, is dumbfounding.

Just look at those ludicrous headlines that go by: Euroclearable domestic government bonds will bring in billions of dollars. The Justice and Development Party (AKP) will deliver that EU membership. Turkish President Recep Tayyip Erdogan will change his stripes and become a democrat. The Turkish economy was great between 2002 and 2018, and it has not accumulated external debt. The USD/TRY rate approached 1.0 in 2007 and this was good.

Erdogan will pray at the Umayyad Mosque in Damascus, he will spare a prayer for the strategic ignoramuses. His drones got the go-ahead to invade Nagorno-Karabakh and that was not because the Kremlin wanted to get rid of Nikol Pashinian.

His drones also invaded Libya while isn’t it more or less true to say that the natural gas resources “big find” in the Black Sea is as good as already connected to Turkey’s grid? Turkey, oh brave ones, last summer invaded the Eastern Mediterranean too…

Third Worlders like we are dealing with here are good at following the shepherds’ pipes and their instincts for adaption are stronger than those of cockroaches. One can’t afford to spend too long dwelling on those who die, all that collateral damage, for careerisim in the Third World might very well involve a high body count.

Since March 22, the first trading day after the firing of governor Agbal, the story of retail FX deposit holders who faced a heavy sell-off by foreign investors has been in circulation.

Since April 5, we have been pointing to this derisory attempt at intervening on behalf of the lira.

After the country has lost its remaining FX, details of this issue will also emerge as an undeniable fact. The bomb will have fallen, the arguments over the good and bad deeds will ensue, but the cockroaches will be prowling the corridors and markets like armoured cars looking for new careers.

ISTANBUL BLOG: Meet “The Botox”, the mafia boss who’s singing like a canary about the Erdogan regime on YouTube
ISTANBUL BLOG: Criminal probe launched into inflation eggheads
ISTANBUL BLOG: Now you see it, now you don’t