ISTANBUL BLOG: Contagion not the story in Turkey’s crisis but for exposure EU banking is the weak link 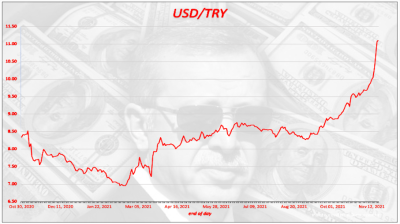 Amid all the sound and fury surrounding the stupendous collapse of the Turkish lira—thanks to the actions of a lairy president who tossed Economics 101, as not suited to his agenda, into the paper bin many moons ago—it’s helpful to remember that the ruination of Turkey is not simply financial or economic, it’s also political, social, even philosophical, indeed it extends across almost any sphere you could name, it’s full-blown destruction. But we’ll get to that in a little while. First some market news.

The rates decision should have been released at 14:00. But, curiously, there was a five-minute delay. And such a delay has not been seen in recent decades. Even more oddly, no information was provided on the cause of the delay. There have been claims over insider trading as regards the central bank’s rate releases in recent years, which all too often cause exploitable market spasms.

Turkey has been in a deepening spiral of crisis since 2016, the year of the failed coup that gave the president, Recep Tayyip Erdogan, the pretext to entrench his regime with all-consuming power, founded on the suspicious outcome of a constitutional referendum and the throwing of tens of thousands of so-called “terrorists” in jail. Wherever you now look in Turkey, in whatever field, there is a sickly pallor. Talk of developing democracy under the current despotism is half-witted and an insult to the tens of millions of Turks who’ve caught the wrong end of the polarisation.

When an emerging market, or to the healthy sceptic in the globalised world, a “semi-colony”, falls into an economic crisis, “contagion” stories bait clicks. The country’s other crises will often be readily ignored by the markets, but a crisis besetting the economy will not.

Contagion talk spreads rapidly, though in Turkey’s case, a most idiosyncratic case, such talk is typically ill-thought-out. Dominoes may, but do not have to, fall.

On November 18, the central bank of South Africa, announced its latest rates decision, increasing the repo rate by 25bp to 3.75%. The rand fell 1%. The market wisdom was that the hike was unexpected and that the monetary authority was promising a gradual rather than a steep tightening.

Post-colonialism is not a plain business. It is superior to the plain and neo versions of forms of colonialism since it is a grifting process, nourished with contradictions to confuse the ordinary folk who slave away trying to keep their heads above water. Nevertheless, the Turkey-South Africa linkage brought a straightforward opportunity for “contagion” stories. Stories that actually bore one stiff, but go straight into the clickbait charts.

Readers, subject to a breathless information bombardment, are found unable to remember what happened five minutes ago. The sexy headlines sell, consistency in the stories be damned.

So, as said, Turkey’s collapse is very much idiosyncratic. Portfolio money in Turkey has already flown. Portfolio exposures to Turkey, as a result, are limited. Foreign direct investors in the real sector enjoy nosediving labour costs.

A recently heralded fashion to buy Turkish partners for foreign manufacturers has taken off. Turkey’s foreign creditors are, meanwhile, like vultures, waiting in the wings to buy in their debtors.

The weak link in the chain is the extension of the EU banking system, led by Italian and Spanish banks, which have significant exposure to Turkey on their balance sheets. However, Turkey will not be responsible for their dire straits. Their Turkey exposure is an example of their decision-making. It is theirs alone.

On November 18, UniCredit and BNP Paribas’ shares lost around 1% while BBVA’s lost 6%.

BBVA’s bigger decline followed in the wake of its announcement  that it had applied to the Capital Markets Board of Turkey (SPK/CMB) to hold a voluntary tender offer to buy the 50.15% of Garanti BBVA (GARAN) bank that it does not own. It seems that the Garanti stock market filing was not seen by the BBVA management as sufficient. BBVA’s chair Carlos Torres  held an investor day for the first time in 14 years.

BBVA’s strategy was predicated on a more benign global economic outlook and with the “worst of the pandemic behind us, growth is back,” he has said.

This is sad for taxpayers in Spain and the EU, but at the same time encouraging for the next generations. If these people are sitting in those company chairs, anyone can.

“We are just spending €1.4bn in terms of capital when Garanti has been delivering €1.2bn profits every year over the last six years,” BBVA’s Turkish CEO Onur Genc said in a bid to play down concerns over BBVA’s exposure to the lira and Mexican peso.

In February, Huseyin Aydin, while still head of Turkey’s banking association TBB and the general manager of the country’s largest bank, government-run Ziraat, stated during a television interview: “The domestic government bonds [risk-free benchmark] offers 11%, while banks offer a 11% return [for shareholders]. Why does the man [head of the government] invest in me [Ziraat Bank]? Why would he take on the risk? Why would he deal with tonnes of audit?”

Right is Ferit Sahenk, who handed over Garanti to the Spanish at incomparably favourable prices.

Among the trio in the photo, only Erdogan is still in his job. Erdogan's son-in-law, Berat Albayrak, right, resigned by Instagram from his post as finance minister, a year ago.

UniCredit is moving in the opposite direction to BBVA. It has been disposing of its Yapi Kredi Bank (YKBNK) stake since last year in a move that can be described as cutting off the arm to cut the loss.

Currently, the Italian lender has an agreement with Koc Holding (KCHOL) for the sale of a 18% stake in Yapi Kredi, while it is selling its remaining 2% stake on Borsa Istanbul.

However, the sale prices are lira-denominated and the lira’s ongoing collapse is adding to the loss UniCredit will book on the disposal of the Yapi Kredi stake.

BNP Paribas has a 99.98% stake in Turkey’s mid-cap TEB (Turk Ekonomi Bankasi). BNP’s Turkey exposure does not take up a big space on its balance sheet. It should be non-contagious.

ISTANBUL BLOG: Don’t bet for or against another rate hike in early 2022. Leave it to Erdogan