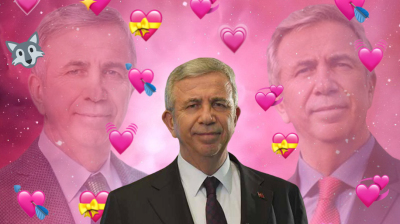 Turkey’s desperate youth, who have lost all hope for their future, love Yavas since he does not steal, he simply spends money on the essential needs of the people of Ankara, not on nonsense or thievery. Yavas does the job, not the talk or the PR. (image credit: @satrayni).
By Akin Nazli April 22, 2021

Back on April 6, the Chinese Embassy in Ankara threatened Mayor of Ankara Mansur Yavas and Iyi Party leader Meral Aksener in a tweet that referred to the pair’s condemnation of the genocide under way against the Uighurs in China.

Shocking? You might say that, yes. Since when did embassies start publicly threatening politicians of the host nation on social media?

Diplomacy, let’s assure ourselves, is not as crude a business as enslaving more than one billion people and requires some humanistic skills. Imperiousness, haughtiness and pomposity might do your masters 6,800 kilometres away in Beijing no favours.

“The Chinese side is determined to object and strongly condemn any person or power challenging China’s sovereignty and territorial integrity in any way. The Chinese side reserves its legitimate right of reciprocity. @mansuryavas06 @meral_aksener,” the Chinese wrote in a churlish Turkish tweet (I venture that is a more precise translation than the Google translation above).

The obvious question is: what form would this reciprocity take?

On April 7, Cuneyt Ozturk, a director at the water and canals administration of Ankara municipality (ASKI), tweeted a response to the Chinese: “Alas! China will respond!!! But they have chickened out? Guess the Chinese embassy won’t pay its water bill this month, or worse, they will ask Yavas and Aksener to send them the antibodies (if they exist) created by their inefficient vaccines that they promised but haven’t delivered?”

The Iyi Party’s response was also severe: “Stop talking nonsense, you shall first stop your genocide against Uighurs. #EasternTurkistan”

Ozturk said in another tweet that he had arranged for some works in front of the Chinese embassy to inspect reports of water seepage.

The row continued when on April 12 a resolution was submitted to the city parliament in Ankara to change the name of the street where the Chinese embassy is located to “Turksoy”. “Soy” means kin.

China’s global expansionism is a hot topic, popular with the Western-dominated global media, and the US media’s blindness to the row between the Turkish opposition and China once more underlines the foul decay of the US system.

The gum that is chewed on China’s influence on Turkey suggests that nationalism in Turkey is on the rise and that, due to it, Turkey is sliding towards China and Russia.

This bright idea is repeated on and on not because think-tankers are ignorant, but because it is simply what is “bought”. For the establishment, or the buyers, in a decadent hegemon, there are some nationalists in the world and they are by definition revisionist. Ah, so … what else would they do rather than partnering with China and Russia against the global hegemon?

When this ready-made mould is applied to Turkey, it produces fruitful comedy. The “ultranationalist” in Turkey is currently President Recep Tayyip Erdogan’s spare tyre, the Nationalist Movement Party (MHP) leader Devlet Bahceli. Erdogan has been “challenging” the US hegemony. So, plain logic has to prove that that is because of the rise of nationalism in Turkey.

We do not have the space or responsibility for fixing this whole comedy of errors, and, besides, there is not much demand for us to do so. Everyone shall stay happy in their comfort zones until China, the new apparatus of neoliberalism, turns the whole planet into a hardcore slave market.

However, we can at least waste time on a few facts. The Justice and Development Party (AKP), which has been subsumed by the Erdogan regime since 2016, would never have had a chance had it not been for the open-handed support from the West.

The MHP was established by one of Turkey’s first Nato officers, who received counter-guerrilla training in the US. And the party was the main deployable power of the US in Turkey during the Cold War.

The charlatan named Dogu Perincek, who is known as the leader of the “Eurasianists” in Turkey among the American think tankers, is the person who divided Turkey’s leftist movement with “Maoism”. The Cambridge Dictionary defines “double agent” as “a person employed by a government to discover secret information about enemy countries, but who is really working for one of these enemy countries.”

The term “multi-agent” has been taken over by computer scientists but Perincek is a piper who has been calling the tune of whoever pays for about a half century. His party has never won even 1% of the vote in an uncountable number of elections in all this time while the US think-tankers have been lately detecting a slide towards Eurasianism in Turkish society.

There were, meanwhile, two careerist ex-officers famous for the “Blue Homeland” extensive maritime territorial claims hokum. Erdogan recently detained one of them and Perincek supported the move.

Returning to Ankara’s mayor, he was also a MHP member during the depths of the Cold War as was Aksener.

The other explanation offered for “Chinese influence” on Turkey points to the economy. It is correct that China’s investments in Turkey in times of late have been on the rise.

The main foreign investment and external financing in Turkey are Western-oriented. The picture is similar in external borrowing and portfolio investments. Turkey has a huge trade deficit with China.

Under these conditions, it is not Erdogan’s smartness that is highlighted by his ability to perplex minds by utilising the Western media, but the ignorance and putridness of his audience in the West.

With a few billion dollars of investments, China maximises its commercial interests in Turkey and keeps the Erdogan regime’s mouth shut when it comes to the Turkic-speaking Uighurs. Meanwhile, the Western media repeats like a parrot that Erdogan’s junior partner is “ultranationalist”.

China’s success is seen as the failure of democracies. Yet there is actually no democracy around. Just collapsing Western economies, thanks to four decades of neoliberal destruction.

Liberal is a good choice of name but when it is applied it creates angry, seething masses who support the populists in the current age and would have supported the fascists in the previous century. A big war to defend “democracies” against the populists seems the only option that could save Western neoliberalism right now.

No one, meanwhile, is aware in the “democratic” world that China is the rising star of neoliberalism since it bypassed the first two decades of the neoliberal destruction. The neoliberal collapse in China will come with a time lag.

By then, there will definitely be no hope pinned on Hunter Biden’s investments in the Middle Kingdom.

Russia? The mafia version of the Russian empire is headed to another 1989 or 1917 sooner or later, but it will provide sufficient material for the vacuous and wearisome ranks of the think-tankers to pay their bills before then.

ISTANBUL BLOG: Meet “The Botox”, the mafia boss who’s singing like a canary about the Erdogan regime on YouTube
ISTANBUL BLOG: Criminal probe launched into inflation eggheads
ISTANBUL BLOG: Now you see it, now you don’t