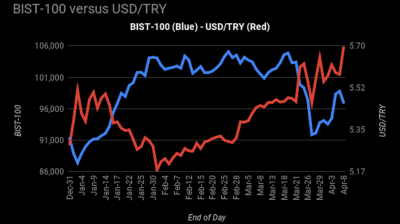 Turkish companies are struggling to get off the hamster wheel of debt as foreign borrowings run near record highs due to a plunge in the lira that has driven up the cost of their obligations in dollars and euros, Bloomberg wrote on April 8.

Lenders are also pulling back on providing new credit as the financial system comes under increasing pressure from the recession and an inflation rate of almost 20%.

The lira is still down by a third against the dollar since the beginning of 2018. Turkey’s debt thus amounts to 40% of gross domestic product (GDP), exceeding ratios in Eastern Europe’s 10 biggest emerging markets and that of South Africa, which together averaged 22%.

Erdogan’s administration has made some efforts to rekindle growth by stoking a credit splurge, leaning on banks to lend at rates barely above inflation. That has bitten borrowers and lenders alike.

$28bn of restructurings sought
Renewable energy company Bereket Enerji Uretim is the latest firm to ask banks to reorganise billions of dollars of loans. It has asked for a restructuring of $5bn of loans, meaning Turkey’s largest companies have either completed or sought at least $28bn of restructurings, up from $18bn a year ago, according to Bloomberg data.

More than half of the liabilities of Turkish companies are to banks based in the country, over double the ratio in 2008, according to central bank data. Non-performing loans (NPLs) as a percentage of total credit rose to 4.11% in February from around 3% at the beginning of 2018.

The energy industry alone in Turkey has more than $51bn in outstanding debt.

All of Turkey’s large infrastructure projects, including Istanbul’s $11bn new mega airport, are financed through foreign-currency loans taken out mainly with local lenders. Their ability to repay is hindered because most of their income is in lira.

‘Lira crisis factors still in place’
In an April 6 note, IHS Markit said that many of the factors that caused the lira crisis last summer remain firmly in place in 2019. It specified the “degradation of institutional integrity, particularly relating to the central bank; high short-term external obligations in the private sector; low net reserves; and a paucity of portfolio capital investment inflows”.

IHS Markit added: “Renewed market instability will intensify fixed investment losses, with higher inflation and potentially higher interest rates further undermining household consumption. Turkish economic losses are now likely to be deeper than previously anticipated, and extend into the second half of 2019. Any recovery in 2020 will likely be muted. Deeper economic losses will exacerbate significant vulnerabilities in the banking sector.

“As of January 2019, Turkish banks had USD57 billion of short-term debt outstanding and non-financial corporations had USD68.2 billion of debt maturing within one year, leaving both sectors vulnerable to shifts in investor sentiment.

“Additionally, with foreign-currency loans accounting for 40% of bank credit provision, renewed lira losses will add to already rising asset-quality pressure. Loans classified as non-performing and loans ‘under close monitoring’ currently stand at more than 12% of total loans and will keep rising through 2020, at least. Fresh punitive measures by the US, a loss of capital inflows, or a prolonged fall of the lira could trigger systemic banking dislocations.”

April 8 also saw a Turkish central bank announcement suggesting that the weighted average cost of funding (WACF) at its revived policy rates corridor would decline back to 24% from 25.5%.

Scrapped auctions
On March 22, in response to lira depreciation prior to the March 31 local polls, the central bank scrapped one-week repo auctions in which it imposes its main policy rate of 24% to fund local lenders and pushed local lenders to the overnight borrowing window at 25.5%. Meanwhile, it imposed a 25.5% interest rate on lira at the USD/TRY swap window. As a result, WACF gradually rose to 25.5%. On April 8, the central bank revived its one-week repo auctions and it also announced that it cut the lira rates at the swap window to 24%.

“Reverting to the 'old' conditions, i.e. prior to 22 March when repo auctions were suspended, will help lower the WACF back to 24% from 25.5%, which is a form of monetary easing. USD/TRY reacted with two kneejerk moves up. The lira remains under pressure at the time of writing, trading at around 5.69. Risks arise from a Putin-Erdogan summit today [on April 8] and confusion around the vote recount in Istanbul and Ankara after last week's municipal elections,” Cristian Maggio of TD Securities said in a research note.

Meanwhile, an unnamed official at the Treasury and Finance Ministry told Bloomberg on April 7 that Finance Minister Berat Albayrak has delayed his awaited PowerPoint presentation on his economic reform plan to April 10 from the previously announced April 8.

“The finance minister is due to present an economic reform package next Monday, although his track record suggests that it will underwhelm. All told, we expect the lira to fall to 6.25/$ by end-2019, a drop of 10%. But it will be a bumpy ride and recent experience suggests that policymakers may react to sharp lira falls by tightening monetary conditions,” Jason Tuvey of Capital Economics said on April 5 in a research note entitled “Turkish lira not out of the woods”.

As President Recep Tayyip Erdogan is showing signs of defiantly following his own agenda despite alarming fragilities besetting his country, the Turkish markets remain in a roller-coaster mood.

“SELL all longs, except perhaps the best lira hedge, [Koza Altin]. And with that, your correspondent vanished in a puff of smoke like a pile of lira,” Julian Rimmer of Investec said on April 8 in an emailed note to investors.

On April 1, Rimmer said in an emailed note to investors that he would be a buyer of Turkey for a trade if there were a 5-10% leg-down in the lira. On April 2, he had changed his mind as he offered short-term trade options in some Turkish equities.

On April 4, the European Bank for Reconstruction and Development (EBRD) pledged to help Turkey tackle its growing level of unpaid and problem loans in its banking sector and S&P Global analyst Frank Gill suggested during a webcast that Turkey’s credit rating was not presently at risk of a downgrade.

On April 8, Rimmer was focused on the hazy developments in Turkish central bank’s foreign reserves. “Turkey: the ceremonial cooking of the books? All bets are off. The books are not just being cooked, they are being boiled, mashed, barbecued, sautéed and finally flambéed in a funeral pyre. It would be remiss of me (but admittedly typical) to bugger off for a week without removing the short-term trading call in Turkey (as if anyone followed it) but some terrifying rumours are circulating around fx mkts at present and risks simply do not justify the limited upside at present.

“CBT reserves are presently $29bn but apparently they are including $10bn of borrowed dollars that have been borrowed for a week with $2bn coming up for refinancing daily nwith their ability to do this rendered all the more difficult by the prospect of civil unrest if AKP overturns the Istanbul vote.  CBT has been recording borrowed assets as their own capital. CBT has also apparently spent $7.5bn in the last fortnight defending the lira to try and win that election. Once the mkt gets wind of the fact the CBT is basically a busted flush then TRY will plummet,” he also wrote on the day to investors.

“Lira devaluation and high real rates have left Turkish assets very attractively valued, but also reflect the country’s uncertain policy path… For equities, geopolitical tensions can be another valuation driver—price/book and price/earnings ratios are low in Turkey…,” the Institute of International Finance (IIF) said on April 6 in a research note.

“The underlying reality is that global capital markets are more volatile and less willing to fund credit-dependent growth, which is – we believe – why [Turkey’s] recent credit expansion [prior to local polls] has again coincided with rising Lira volatility. Indeed, if we scale the quarterly flow of credit by nominal GDP, the quarter-on-quarter change in this measure – the credit impulse to GDP – is larger this year than at the peak in 2017, underscoring just how credit-dependent the growth model remains. A shift to less credit-dependent growth, including via structural reforms, is needed,” the IIF said on April 4 in a separate research note entitled “Credit-Dependent Growth in Turkey”.

All-in-all, Turkish markets are more heavily dominated by vulture funds at the moment. That was the growing case as cynical observers contended the country was in an escalating descent to complete banana republic status, but the Erdogan administration’s latest moves to freeze lira liquidity on the London swap market prior to the local polls to steady the lira totally spooked long-term investors in Turkish markets and left the ground free for short term hit-and-runners.

The lira and bonds are following highly volatile paths in their relatively supressed channels.

Stability in Turkish markets, and in the country’s political direction on all fronts, is not looming on the visible horizon as Erdogan is in need of more tension and the kicking up of more dust to obscure his election defeat. He has no real time to focus on deteriorating economic conditions.