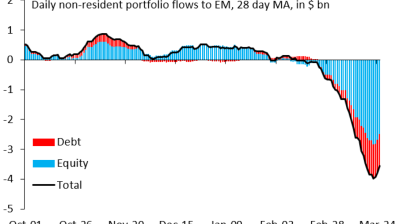 The sell off of bonds and equities in this crisis appears to be slowing in the last few days
By bne IntelliNews March 26, 2020

Equity and bond markets have been rocked by record volumes of outflows since the end of February in one of the biggest sell offs ever, but the pace of selling seems to be slowing in the last few days, said the Institute of International Finance (IIF) on March 24.

“Compared to last week, the pace of outflows for the current #COVID19 outflows episode has been slowing down. Encouraging data, yet overall uncertainty still remains, especially taking into account the acceleration in #debt Debt outflows,” Jonathan Fortun said in a tweet, an economist with IIF.

That would be good news for investors that have retreated to whatever safe havens they can find.

Unlike the crisis in 2008, this one has been marked by bigger concerns over debt than equity.

“Back in ’08, during the [Great Finance Crisis] most of the outflows were attributed to equities (typically fast mocing and reactive to geo-political events). This time around we are seeing debt flows also being hit,” said Fortun.

IIF tracks debt, equity and capital flows. As bne IntelliNews reported in Game of Loans” in November last year international debt is currently at an all time high of $250 trillion, of which China accounts for 40% of the total.

Russia’s equity market has been especially hard hit. After a strong start to the year where the dollar denominated Russia Trading System (RTS) climbed to 1,600, up some 20% on the year, a level it has not seen for about five years, it has dropped like a stone since. The RTS is down over 40% YTD and was trading at 981 as of the open of trading on March 25.