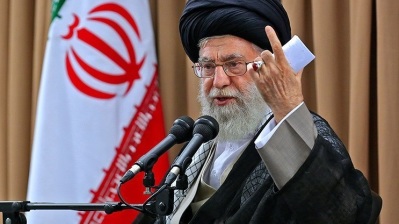 Well, there’s no point calling a spade a shovel.

Iran’s President Hassan Rouhani described the White House as “afflicted by mental retardation” as he hit out at the Trump administration’s “outrageous and idiotic” decision to impose sanctions on Supreme Leader Ali Khamenei, Foreign Minister Mohammad Javid Zarif, military chiefs and other top officials. The move has permanently closed the path to diplomacy between Tehran and Washington, the Iranians warned.

Trump didn't take kindly to the suggestion he suffers from a mental disorder, in fact he threatened Iran with "obliteration". Though he has made up with North Korea's Kim Jong-un, who once called him "a mentally deranged US dotard", he bristled at Rouhani's words, tweeting: “Iran leadership doesn’t understand the words ‘nice’ or ‘compassion,’ they never have. Sadly, the thing they do understand is Strength and Power, and the USA is by far the most powerful Military Force in the world, with 1.5 Trillion Dollars invested over the last two years alone.”

He added: “The U.S. has not forgotten Iran’s use of IED’s & EFP’s (bombs), which killed 2000 Americans, and wounded many more [in Iraq] … Any attack by Iran on anything American will be met with great and overwhelming force. In some areas, overwhelming will mean obliteration.”

In further remarks, Rouhani said the sanctions against Khamenei were particularly “outrageous and idiotic” because the 80-year-old cleric has no overseas assets and no plans to ever travel to the US. Washington had spent weeks insisting that Tehran meet America’s diplomacy with its own diplomacy, rather than military moves, but it was now trying to immobilise its chief diplomat, he observed.

Zarif responded to news of the sanctions by remarking that the Americans “despise diplomacy” and the Trump administration has “a thirst for war”.

“Imposing useless sanctions on Iran’s supreme leader and the commander of Iran’s diplomacy is the permanent closure of the path of diplomacy,” Iranian foreign ministry spokesman Abbas Mousavi added in a tweet on June 25. “Trump’s desperate administration is destroying the established international mechanisms for maintaining world peace and security.”

Speaking in Israel, Trump’s national security advisor, foreign policy hawk John Bolton, claimed the president would be happy to enter into real negotiations with Iran. “All that Iran needs to do is walk through that open door,” he said. However, Iran has said it will even think of going into talks until the US stops its “economic war” against the Islamic Republic by dropping sanctions. Adding more sanctions at this stage is therefore not likely to shift Tehran from that standpoint.

The Iranian ambassador to the UN, Majid Takht-Ravanchi, said: “No one in clear mind can have a dialogue with somebody who is threatening you with sanctions; as long as that is still there, there is no way we can have a dialogue.”

Planned breach
On June 26, Iran intends to breach the enriched uranium limits set out in the 2015 nuclear deal. Its gradual move towards the accord’s exit has been provoked by the US tightening sanctions further and further and the European Union—despite France, Germany and UK remaining in the nuclear deal as signatories along with Iran, Russia and China—failing to provide any substantial options for keeping open trade channels in the face of Washington’s “maximum pressure” campaign.

The three European countries still in the accord put out a statement on the margins of the UN security council on June 24 calling on Iran to stick with the deal. It said: “It is in everyone’s interest to show restraint and avoid any actions that would undermine this vital pillar of the non-proliferation regime and of our collective security.”

They insisted they were working hard to implement their commitments to Iran. That appeared to be a reference to launching the much-delayed “Instex” financial mechanism to help Tehran trade with Europe on a basis that would shield trade parties from US sanctions.

Analysts said the impact of the fresh US sanctions would be limited. “The newly announced Iran sanctions are symbolic,” Jarrett Blanc, a former senior state department official now at the Carnegie Endowment for International Peace, was cited as saying in the Guardian.

US Treasury Secretary Steve Mnuchin said Trump's executive order introducing the sanctions, which would lock up "billions" of dollars in Iranian assets, was in the pipeline before the Iranians shot down a US drone in the Gulf last week.

Setad sits on billions
Khamenei supervises an organisation known as Setad. It confiscated property abandoned after the 1979 Islamic Revolution and was gradually transformed into a huge business conglomerate with holdings of about $95bn.

Setad was already under US sanctions. However, Trump has introduced more punishing sanctions, targeting anyone connected to Khamenei. That is expected to include anyone sitting on company boards, or officials in his clerical establishment that shadows the elected government.

The US denies it wants war with Iran or regime change. Iran’s leaders say they believe Washington is lying in that its actions seem designed to topple the regime. The sanctions screw is being tightened more and more to the point where the US hopes Iran will be in such economic distress that it will come to the table to negotiate concessions on items such as its nuclear programme, ballistic missile production and support for militias in conflict zones of the Middle East.

Trump keeps repeating that there is no way he can tolerate Iran developing a nuclear weapon—but nobody has presented any reliable evidence that it is moving in that direction and, indeed, UN inspectors have confirmed it has substantially scaled down its nuclear programme to keep it clearly within civil parameters. That scaling down occurred under the nuclear deal—which Trump unilaterally pulled the US out of in May 2018 saying the accord was not tough or broad enough.

“Iran potentially has a phenomenal future, just like North Korea,” Trump said while signing the executive order for more sanctions. He added that “I know many Iranians living in New York… I have many friends who are Iranians.”

On meeting directly with Khamenei, Trump said: “We can do something very quickly.”

Khamenei has shown no interest in meeting with Trump, even refusing to send him a message via go-betweens, saying he is not a character deserving of such a gesture.

In another development on June 24, an adviser to Iranian President Hassan Rouhani said the US has to offer something on top of the nuclear deal struck in 2015 if it wants more concessions from Iran.