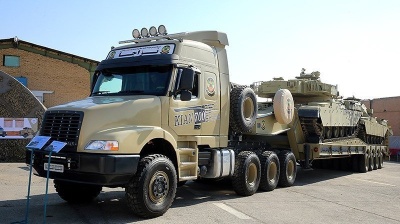 Collectors of Volvo trucks may need one of these if they're to boast the full range.
By bne IntelliNews November 11, 2019

However, very soon after images of the Kian 700 Super Heavy Tank Transporter were released, online defence industry observers noted that the cabin of the vehicle appears to resemble that of a Volvo VN transporter truck—as per usual with military hardware ‘achievements’ unveiled by Iran’s armed forces, experts began questioning whether the defence product on show was quite as indigenously developed as claimed.

A rebadged Volvo or not, the truck is billed as being equipped with a 700-horsepower engine, which can pull up to 200 tonnes of weight. Full-size tanks can be mounted on the vehicle, according to photos released by the Iranian military.

Using a special trailer, the Kian 700 can easily transport two tanks weighing 60 tonnes for any distance, the military officials who announced the vehicle said.

Iran previously used Soviet-built wagons including the GAZ-69, GAZ-66, ZiL-157, Ural-375, KrAZ-255, and MAZ-537, Russian media reported after the presentation of the super heavy tank transporter. However, in recent years, these have been replaced with the Kian 500 and 600.