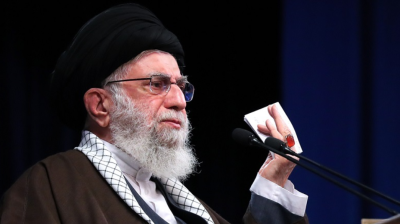 Khamenei. Said to have directly intervened.
By bne IntelIiNews October 22, 2020

It was Iran’s Supreme Leader Ali Khamenei who last week directly ordered Iraqi armed factions to halt their attacks on US interests after taking advice from the UK, Middle East Eye (MEE) said in an exclusive report on October 22.

Shia armed factions and politicians were cited as saying Khamenei’s orders were “explicit” and demanded the paramilitaries “immediately” cease their attacks.

The US embassy in Baghdad, military bases hosting the US-led coalition forces in Iraq and logistical support convoys were subjected to near daily attacks with Katyusha rockets, explosives and sometimes direct fire over the past three months. In response, US Secretary of State Mike Pompeo threatened to close Washington’s embassy in Baghdad unless the attackers were brought to heel. MEE said Iraqi officials informed it that Pompeo also pledged to strike dozens of targets, including secret headquarters and sites belonging to armed factions and Iranian-backed politicians.

Iraqi officials were quoted as saying the US administration was afraid that armed groups linked to Iran would attack the Baghdad embassy to embarrass US President Donald Trump ahead of the November 3 American presidential election.

MEE said it had determined that it was the UK that gave Iran “very important advice”, namely, in the words of a cited politician, "to avoid provoking Trump at this stage as he is serious about his threats and because he is desperate and will not hesitate to do a reckless act that will cost everyone dearly”.

Much on minds in Iran right is how Tehran would respond to Joe Biden’s proposals for bringing the US back into the nuclear deal abandoned by Trump in 2018 should Biden win the White House.

Iran’s reformists and centrists remain badly damaged by the failure of the original agreement, signed by centrist, pragmatic President Hassan Rouhani, to deliver economic benefits to ordinary Iranians. The hardliners were always against signing up to the deal, saying the US could never be trusted.

In a recent interview in Kar Va Kargar, Iran’s foreign minister, Mohammad Javad Zarif, insisted the foreign ministry had not been naive to negotiate with the Americans, but said Trump had “blown up the entire negotiating room”.

Rouhani is due to leave office after Iran’s presidential election in early 2021. As reported by the Guardian on October 22, Iran’s weakened government may only have a few months to negotiate a revived nuclear deal before facing its own electoral challenge by hardliners who oppose any engagement with the West.

Biden has pledged that “if Iran returns to strict compliance with the nuclear deal, the US would rejoin the agreement as a starting point for follow-on negotiations”. But even if he does win the US presidency, Biden would not take office until January 20, leaving only a narrow window for reformists to convince Iranians that the path of engagement is worth trying again.

Iran, meanwhile, would be likely to demand compensation for the massive economic losses caused to it by Trump walking out of the nuclear deal and imposing crushing sanctions.

Al-Monitor reported on October 20 that extremists among the opponents of Rouhani are calling for his impeachment and even execution after he suggested rapprochement with the US could happen.

“Mr. Rouhani! Today, the absolute majority of the Iranian public demands nothing less than your dismissal and punishment,” the publication reported Mojtaba Zolnouri, a hardline lawmaker from the Paydari camp as tweeting. Paydari is shaped by the staunchest Rouhani critics known for their intolerance toward engagement with the West. Zolnouri, who also chairs the Iranian parliament’s influential National Security and Foreign Policy Commission, went further: “The supreme leader should issue a ruling on hanging you a thousand times.”

Turkey’s President Recep Tayyip Erdogan late on November 30 announced the country’s most widespread lockdown so far amid a surge in coronavirus (COVID-19) infections. Curfews have been ... more