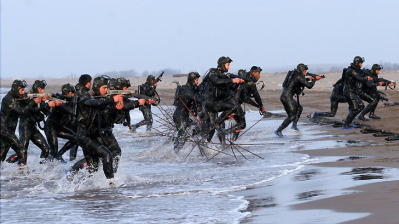 The Revolutionary Guard has been told to stick more to what it knows best. / sayyed shahab-o- din vajedi.
By bne IntelliNews January 22, 2018

Iran’s Islamic Revolutionary Guard Corps (IRGC) and other branches of the military have been ordered to sell off business holdings and commercial assets “irrelevant” to their main function, Iranian media outlets reported on January 21.

Although usually thought of as a branch of the Iranian armed forces charged with protecting Iran's Islamic system, the IRGC also essentially runs a financial empire with holdings in the country's construction, energy, banking, insurance and telecommunications industries, among others. There are no reliable estimates of what share of Iranian GDP can be attributed to this economic powerhouse but analysts usually place it somewhere between one and two-thirds of national output.

Iran's Defence Minister, Brigadier-General Amir Hatami, reportedly told local media that Supreme Leader Ayatollah Ali Khamenei has instructed all of Iran’s armed forces to either divest economic holdings on the country’s capital market or sell them to the private sector.

“They will pursue this matter until these forces withdraw from irrelevant economic activities,” Hatami reportedly said.

President Hassan Rouhani has been trying to scale back the economic involvement of the Guard since he first took office in 2013. He has made little progress with the policy, but if the backing of Khamenei turns out to be solid, that could change, Foad Izadi, assistant professor at the Faculty of World Studies at Tehran University told Bloomberg.

Interestingly, the call to divest holdings of what some critics have described as “a business conglomerate with guns” comes just a few weeks after nationwide anti-establishment demonstrations—variously featuring protests against economic hardship, a lack of civil rights and unaccountable power structures in Iran—shook the country. Whether the instructions on business assets issued to the military is part of the establishment’s response to that unrest is unclear, but the IRGC will certainly not want to be seen to be moving out of any business fields related to the state or national security where observers could make the case that the move is in some way related to the pressure of US sanctions.

Among the holdings of the Guard—which have been harried by the US with sanctions for decades—is one of Iran’s largest construction companies, the Khatam al Anbia Construction Headquarters. It has a workforce of tens of thousands and has been contracted to build some of the state's biggest oil and gas projects.

If fairly pursued, the Khamenei decree on assets held by the military would suggest that huge swathes of the economy could come under private or semi-private ownership. However, many Iranians remain sceptical that that could ever be the case. They suggest that any divestments will not benefit the real private sector and will instead be to the advantage of those close to the IRGC or huge business affiliates such as Khatam al Anbia.

Huge industrial conglomerates
Observers also say there is not a big enough pool of buyers and liquidity in the country’s financial system to take over the huge industrial conglomerates owned by the Guard. Foreign ownership of such substantial assets remains difficult to achieve given Washington's refusal to lift sanctions placed on the IRGC which it sees as a backer of terrorism such as via its links with Lebanon's Hezbollah. In fact, as things stand in relations between Iran and the Trump administration, the US is more likely to double down on such sanctions in the near future.

No date yet has been given for the commencement of military-held asset sales, but the Iran Privatisation Organisation is to be tasked with selling IRGC-affiliate-owned and similarly owned companies through public auctions.

There are believed to be more than 200 holding companies owned by the Iranian military apparatus. It is estimated that they employ more than 135,000 people directly.

The Guard was formed soon after the Shah was forced from power in 1979. It initially operated as a local force across Iran, but it expanded quickly after Saddam Hussein invaded Iran in 1980 and Ayatollah Khomeini permitted it to have its own ground, navy and air forces. After succeeding Khomeini in 1989, Khamenei created the Quds force, which is in charge of the IRGC's foreign operations, such as those in Iraq and Syria.