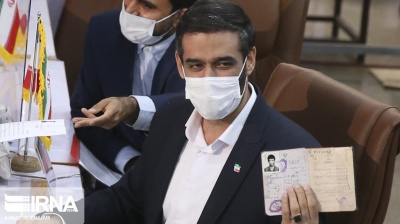 Brig Gen Saeed Mohammad, until recently commander of Islamic Revolutionary Guard Corps’ Construction Base, was among those who quickly announced their application to stand.
By bne IntelIiNews May 11, 2021

Iran’s outgoing president, Hassan Rouhani, has hit out at the last-minute tightening of criteria that individuals must meet to obtain permission to run in the country’s upcoming June 8 presidential election.

One complaint of Rouhani, who is due to leave office, is that the 12-strong Guardian Council has no legal authority as a vetting body to impose restrictive criteria excluding the candidatures of anyone younger than 40 and older than 75. The 72-year-old president, a pragmatic moderate who has been in office since 2013, serving two consecutive terms (a third consecutive term is not permitted under the law), called on the interior ministry—which is responsible for accepting potential candidates’ registrations—to simply ignore the age bar, arguing that it exceeds provisions in the Iranian constitution.

There has been speculation that Rouhani’s 39-year-old technology minister Mohammad Javad Azari Jahromi is planning to run for president, but the age provision would bar his way. At this point, any ambition that he might have to stand in the contest looks doomed—even if the interior ministry was to respond favourably to Rouhani’s request, the Guardian Council could still block him, or any other applicant for permission to run, on other criteria. One criterion is that a candidate must be deemed sufficiently pious. The Council works under the religious leadership of Iran’s supreme leader, Ayatollah Ali Khamenei, who has the final say on all matters of state.

Though Iran’s presidential elections are known for attracting a high turnout, the reality that the elected government is in the final analysis beholden to the theocratic structure above is not lost on ministers.

This point has been the subject of much discussion in Iran recently after the foreign minister, Mohammad Javad Zarif, became the victim of the leak of an an audio file in which he conceded he was largely powerless in his current role. Zarif, a favourite for many reformists, has repeatedly said he has no plans to contest the election but the controversy led to him apologising to the supreme leader about his remarks, and conservatives in Iran will hope that the affair rules out any change of heart.

Some reformists want to see Rouhani’s vice-president, Eshaq Jahangiri, throw his hat in the ring, but there are local reports that Jahangiri’s brother has been arrested for smuggling—the incident could be used to discredit him. Some reformists want the reform camp to boycott the election, contending that it will be more effective for their cause in the long run to leave the conservatives in visible control of the institutions as a reformist in power simply receives the blame for state failures even when, in reality, they have little power.

Siamak Raphik, a member of the Guardian Council, was quoted by the Guardian on May 11 as defending the age criteria, saying the vetting body was “the sole custodian of the eligibility of candidates”. He added: “Cohesion is vital for any country and elections are a source of cohesion and authority in the country.”

The list of approved candidates will be announced on May 26 after a process allowing for appeals to be heard.

Women are not formally debarred from running, and many put themselves forward. One woman arrived illegally on a motorcycle on May 11 to register. No woman has, however, been allowed to stand in the Islamic Republic’s history.

Brigadier General Saeed Mohammad, who recently resigned as the commander of the Islamic Revolutionary Guard Corps’ (IRGC’s) Construction Base, a huge company in Iran, is also among those who have quickly announced their application to stand.

Three ‘big beast’ conservatives—60-year-old judiciary chief Ebrahim Raisi, former speaker of the Majlis (the parliament), Ali Larijani, and the pro-IRGC politican Saeed Jalili have yet to declare. Local reports suggest Raisi, widely tipped to be the next supreme leader despite losing heavily to Rouhani in the 2017 presidential election, may announce his intended candidacy on May 13.