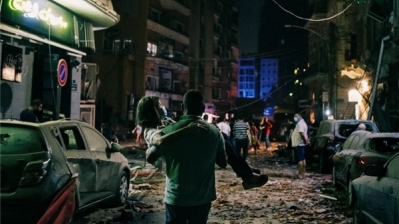 Beirut families have been searching for loved ones trapped under rubble amid unimaginable devastation.
By bne IntelIiNews August 5, 2020

At least 100 people are known to have died after the massive explosion in Beirut’s port area, with thousands injured and reports of up to 300,000 people made homeless. Lebanon said the blast was caused by the ignition of 2,750 tonnes of ammonium nitrate—a chemical often used as fertiliser but also sometimes used as bomb materiál—that was stored unsafely in a warehouse.

In a message to his Lebanese counterpart Michel Aoun, Rouhani described the events as a source of deep sorrow and grief for Iran. “As the representative of the nation and government of the Islamic Republic of Iran, I express condolences to the families of the victims, and offer my heartfelt sympathies to you and the people of your loyal and brotherly country,” he said.

Rouhani added: “As a humanitarian move, the government of the Islamic Republic of Iran expresses its preparedness to send medical aid and medicine, help treat the injured and provide any other medical help.”

He expressed the hope that an investigation into the incident would soon be completed and help restore calm to Beirut.

Lebanon has been in an economic and political crisis since the end of last year, while the coronavirus (COVID-19) pandemic has added a medical crisis to the nation’s woes.

The ammonium nitrate is thought to have been stored in the warehouse for the past six years, despite safety warnings from officials.

The blast and sound wave from the explosion was felt as far away as Israel, Turkey and Cyprus. Israel reportedly scrambled jets to discover the cause of what amounted to a 3.5-magnitude earthquake in the Lebanese capital.

Following the blast, rockets were reportedly fired on the US embassy in Baghdad by groups said to be close to Iran.