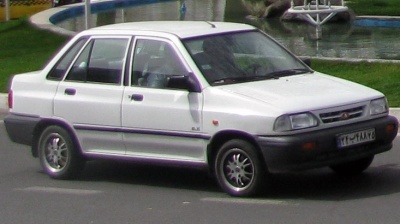 The “super budget” subcompact, a copy of the old Korean Kia Pride, has been produced in Iran since 1993 in various formats including as a two-door pickup and sedan.

SAIPA saw the vehicle as a cash cow for many years, but modern crash test rules and government pressure have finally seen the last model roll off the production line.

The automaker’s Pride cars were the most popular and cheapest models on the Iranian market. In recent years, it cost around $4,500 at the free market exchange rate, coming in much cheaper than main automaking rival IKCO's smallest vehicle, the Peugeot 206.

The Pride became a running joke in Iran. It was ridiculed by urbanites for its poor reliability and safety rating. Quips about the car included “a faster way to the grave, coffin not needed” and “Pride-o” which referred to the car's usage in several settings, a play on words referring to Toyota’s Prado off-road vehicle.

In one concession to auto anoraks who are pained to see the Pride going out of production, SAIPA said the 151 pickup variant would be hanging around for a while longer while the company works out a new replacement for commercial customers.

The Tiba, Tiba 2, Saina and Kwik, which have been developed purely in Iran, will replace the Pride, but their entry prices will be markedly higher than what is paid for a Pride.

SAIPA came under pressure over several years from successive ministers and governments to dispense with the car, but it appeared impervious to criticism and memorandums from several quarters.

It has taken the second Rouhani administration to force SAIPA to discontinue the vehicle. The state has demanded that the company find alternatives, such as the Tiba.