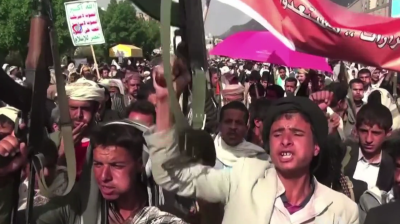 The Houthis have taken the war into the UAE. / Henry Ridgwell (VOA).
By bne IntelIiNews January 17, 2022

Iranian-backed Houthi forces on January 17 expanded the Yemen conflict into the United Arab Emirates (UAE) with apparent drone strikes in Abu Dhabi on the very day that Tehran announced that three of its diplomats had arrived in Saudi Arabia in an effort meant to help repair regional relations.

The attack, which left three people dead, also comes amid the ongoing Vienna talks in which Iran and six major powers are attempting to negotiate a path to reviving the 2015 nuclear deal, or JCPOA, in another attempt at defusing tensions in the Middle East.

One of the strikes in the UAE, near the airport of the capital Abu Dhabi, which also injured six people, left flames billowing from oil storage tanks owned by the firm ADNOC, The Associated Press reported. A separate explosion at a construction site at the airport, also thought to have been caused by a drone, ignited a fire but caused minor damage, it said. Two Indian nationals and one Pakistani were killed in the oil tank fireballs. All the wounded were reported to be lightly hurt.

The attack was quickly claimed by the Houthi leadership. The UAE police said it was likely to have been conducted with small flying objects.

“UAE authorities… are dealing… with the heinous Houthi attack on some civilian installations in Abu Dhabi,” tweeted UAE presidential advisor Anwar Gargash, referring to the Yemeni rebels. “The tampering of the region’s security by terrorist militias is too weak to affect the stability and safety in which we live,” he added.

The strikes, however, may come to be seen as representing a sharp escalation in hostilities in Yemen’s seven-year war in which Saudi and UAE forces are aligned against the Houthi rebels. The Houthis lately threatened to launch strikes against the UAE after losing the key area of Shabwa, near the city of Ma’arib in northeast Yemen, after Saudi forces and UAE-backed ground troops played a part in pushing back a Houthi advance.

A Houthi military spokesperson, Yahia Sarei, on January 17 stated that the group launched an attack deep inside the UAE. He said a statement detailing his claims would soon be released. Later in the day, speaking with AFP, Abdul Ilah Hajar, advisor to the president of the Houthi Supreme Political Council, warned the attack would be the first of many if the UAE did not end its hostility towards Yemen.

Saudi Arabia has been targeted by drones and missiles fired from Yemen throughout the war, but this drone attack was the first experienced by the UAE.

Both Saudi Arabia and the UAE have been attempting to devise formulas for ending the war. The Saudis in recent months readily agreed to proposals from Iran to hold talks in Baghdad to help repair bilateral relations. Tehran and Riyadh broke diplomatic ties in 2016 after crowds of people attacked the Saudi embassy in Tehran and a consulate office in Mashhad following the execution of a prominent Shia religious leader by the Sunni-majority kingdom.

“I believe the Saudi side is interested in talks on some regional issues as well, but our negotiations, for now, are focused on bilateral issues and on when to return relations to a normal state,” Iran’s Foreign Minister Hossein Amirabdollahian told Al Jazeera last week.

The Iranian foreign ministry said on January 17 that the three Iranian diplomats, granted visas by the Saudis, had arrived in Jeddah, Saudi Arabia, to reopen Iran’s representative office to the Organisation of Islamic Cooperation (OIC), an organisation with 57 members. The office was closed six years ago during the diplomatic spat over the execution.

The war in Yemen has killed around 130,000 people—both civilians and fighters—and has exacerbated hunger and famine across the country.