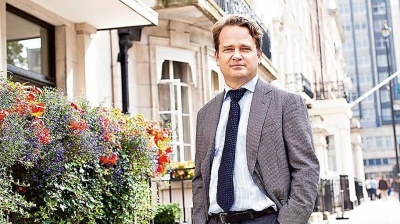 Mattias Westman, chief executive of Prosperity Capital Management, predicts Russian oil will survive an impending bloodbath which may eliminate multinationals such as BP and Exxon Mobil.
By Jason Corcoran in Dublin May 15, 2020

Mattias Westman, chief executive of Prosperity Capital Management, predicts Russian oil will survive an impending bloodbath which may eliminate multinationals such as BP and Exxon Mobil.

Westman, whose firm is the most successful portfolio investor in Russia and the former Soviet Union, believes the whole energy landscape will be transformed by a collapse in demand caused by the coronavirus pandemic.

“In principle, hardly any major producer can survive with the exception of Russia,” Westman told bne IntelliNews in an interview. “There can be no shale oil, there can be no deep sea, no offshore. You can still produce in the Middle East but over time their budgets are going to completely implode at $30.”

Besides specialist shale producers which are already going under, Westman thinks oil majors, such as BP and Exxon, are in serious trouble due to their large debts and negative cashflows. “These prices will destroy a lot of supply and at this price even BP and Exxon would be in serious trouble as going concerns,” he said. “But I don’t think Russia is more exposed than others. Maybe less!”

Westman thinks Aramco, Saudi Arabia’s state-controlled behemoth, will be fine itself although the Saudi budget will be in deep deficit.

Global oil prices fell to 21-year lows last month before the world’s largest oil-producing countries, led by Saudi Arabia struck a deal with Russia to limit global production from May to help drain the glut of crude in the global market. Both economies have reserves in the region of $500bn and can live with low oil prices but Russia’s $40 budget breakeven price is half that of Saudi Arabia’s.

“Russian companies will be fine,” added Westman. “The Russian budget will also be in deficit but much less than Middle East’s budgets.”

Russia's oil industry is being forced to cut output by 8.4% to its lowest level since 1994. as a result of a new deal to reduce production of OPEC + countries announced on April 10th. The load will fall on the seven largest companies with Rosneft bearing the brunt with about 49% of the overall reduction.

Rosneft responded by announcing it will slash its investment programme this year by $10.2bn while Lukoil, the nation’s second-biggest producer, plans to trim their investments by $1.5bn.

Led by the mercurial Igor Sechin, Rosneft has already gone cap in hand to President Vladimir Putin asking for access to credit and tax holidays.

“Rosneft is also the only [Russian oil] company with significant debt,” said Westman."I guess if you are going to produce less you will invest less. Sure, there are tough times but much easier [for Russia] in relative terms."

Russia’s typically high dividend yield ,may also be an important differentiator for investors as Western multinationals announce plans to curb payouts. Exxon Mobil froze its dividend for the first time in 13 years while BP said it will make a review every quarter after its profits plunged and leverage soared. Royal Dutch Shell Plc, Britain’s most valuable company, said on April 30 it is reducing its payout to shareholders for the first time since at least the Second World War.

The Russian equity market has traditionally paid the highest dividend yield among the largest emerging markets. The market’s dividend yields were more than 7% in last year, which is twice the MSCI Emerging Markets Index dividend yield of 3.2%

Rosneft insists it will maintain its dividend but Tatneft, the nation’s fifth-largest producer, broke ranks on April 27 and said it will cut its fourth-quarter payout due to the need to reserve cash to weather the coronavirus storm.

“It’s a mixed message from corporates,” said Westman, whose firm owns a big slug of Lukoil. “Some people are paying, some people are not and some people are postponing but it looks like Rosneft will play. Lukoil doesn’t have any debt and they are paying what they earned. Why would you stop doing that ? It’s obvious for Lukoil."

Analysts at VTB Capital are speculating that state-controlled holdings, such as Rosneft, Gazprom Neft, Gazprom and Transneft, may yet postpone their full-year payments.

“Similar decisions in favour of keeping cash flows within companies…might be made by other companies in the sector, given the lack of clarity on oil price recovery and the impact of Covid-19 on global oil demand and economic growth,” said Dmitry Loukashov, energy analyst at VTB Capital.

VTB Group, Russia’s second-biggest lender, said it could yet reduce its dividend to make up for losses caused by the coronavirus crisis amid fears that the pandemic is wreaking havoc on loan books.

“There is more uncertainty in the banks than the oil companies,” said Westman. “But the banks are better managed [than last crisis] but it depends on how bad this gets and it’s difficult to know that. Our base case is that it will start improving sometime in the second half and certainly next year. If the economy continues to slow then maybe the banks will suffer more than we anticipate.”

On a macro level, Westman noted that Russia has much more levers in its armoury to fight an economic downturn but admits the Kremlin’s reaction thus far has been muted in comparison to the US and the European Union’s trillion-dollar aid packages.

“Because of the things they have gone through, they are very fiscally conservative, he said. “Some countries are in a better position to give fiscal stimulus because they can print currency which is considered stable anyway, like the euro and the dollar. If Russia starts printing lots of money then they will have large devaluations which will not be helpful.”

Prosperity’s fund managers will make small adjustments to their portfolios but are not rushing to declare winners and losers - even in sectors like retail or e-commerce.

“People are buying more groceries because they are not going out so e-commerce retailers will do well but it’s not good for the advertisers,” said Westman, who owns shares in the the leading Russian grocer X5.  “Yandex, like Google, is basically an advertising agency and I think in tough times you can’t advertise and I can’t see why people are so enthusiastic about advertising agencies.

Prosperity’s portfolios have inevitably been hammered by the sell-off in equities. The firm has seen its assets under management shrink by 30% to $3.5bn from $5bn although Westman attributes that mostly to a fall in the portfolio’s value rather than any client redemptions.

As a result, the company is expecting lower management fees for 2020 and has prepared a cash forecast and stress tests, including further reductions in fees and loss of clients. “I don’t know whether it will be a V-shaped recovery or an U-shaped recovery but I don’t think it will be a L,” he said.

A Swedish national, Westman has been investing in Russia for 27 years and launched his firm’s flagship Prosperity Fund 24 years ago.  Before becoming stockbroker, he served on the Russian desk of the Swedish Ministry of Foreign Affairs, having learnt Russian with the Swedish Armed Forces.

Westman is riding out the pandemic in Sweden where the government is employing a herd immunity policy, a situation whereby enough people in a population have immunity to the infection to be able to effectively stop that disease from spreading.

Schools haven’t been closed while bars and restaurants remain open. “You can’t stand – you have to sit in the bars,” said Westman. “It’s all very slow and cautious but everything is open.”

Westman has bought into his government’s controversial stance and is sceptical about the need to freeze the global economy: “Of course, it’s a very bad virus but was it really necessary to shut the whole world down for it. Does it really help?”

LONG READ: Serbia’s hijacked protests
2 days ago
Divided Poland to choose more turmoil in presidential election on Sunday
4 days ago
No enthusiasm for July 15 election in North Macedonia amid relentless coronavirus epidemic
5 days ago
Mongolia to go ahead with Naadam festival, but with no tourists
7 days ago
Protests pose unprecedented threat to Turkmenistan’s authoritarian government
7 days ago