ING: Russian balance of payments support a stable ruble in the near term 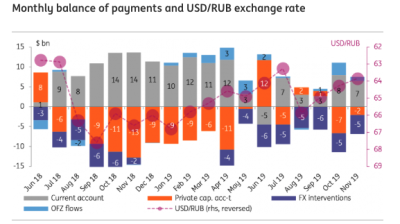 Improvement in the corporate capital account was the primary support factor to the ruble exchange rate, which appreciated from $/RUB64.3 in October to 63.9 in November, as the FX purchases by the central bank of Russia and Ministry of Finance remained virtually unchanged at $4.3-4.5bn in October-November, and the net portfolio inflows into the local currency state bonds (OFZ) in November haven't really matched October's extremely strong $3.1bn result.

This balance of payment configuration represents a noticeable change vs. the typical performance of 2019 when ruble strength was assured only by portfolio inflows. While the reasons for the improvement have yet to be understood, the decline in the capital outflows at first glance is a positive development for the ruble exchange rate in the near term, supporting our constructive expectations of $/RUBstaying around the 64.0 level in 4Q19-1Q20.

An outperformance of this target is possible if the generally favourable global market mood, including optimism about global trade negotiations, persist, while risk factors include possible re-emergence of US-Russia sanction rhetoric, including the upcoming discussion of the Defending American Security from Kremlin Aggression Act, or Daska at the US Senate committee scheduled for 11 December. 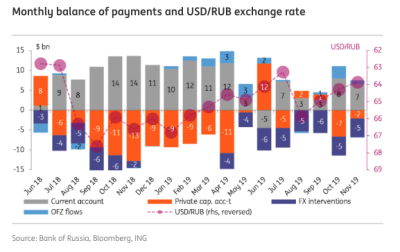 Arguments in favour of another rate cut

Improvement in the balance of payments structure, even temporary, can serve as an additional argument in favour of another rate cut at the upcoming central bank meeting on 13 December.

We have recently changed our near-term view on the year-end key rate from 6.5% (unchanged) to 6.25% (a 25 bp cut from the current level) following the lower than expected CPI reading of 3.5% for November and continued improvement in households' inflationary expectations, which combined with the high base effect should push CPI growth even lower to 3.2% y/y in December 2019 and 2.3-2.5% y/y in 1Q20.

In the meantime, we maintain the expected terminal key rate at 6.0% - the lower bound of the equilibrium range, given the persisting medium and long-term uncertainties regarding the inflationary and exchange rate trends. We expect the central bank commentary on 13 December to focus on the limited downside of further key rate cuts.