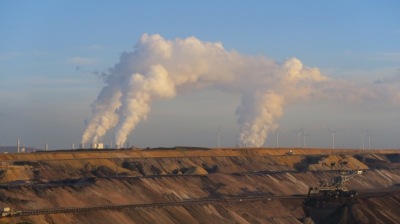 The transition to a green economy is good news for metal producers as it will drive up demand, but the metallurgical industry will have to deal with its own emissions problems too.
By Warren Patterson Head of Commodities Strategy at ING in Holland October 19, 2021

Hardly a day goes by without some mention of the energy transition and the need to cut global carbon emissions significantly. The one silver lining to Covid-19 was that it provided a taster of a lower carbon emission environment. The IEA estimates that global CO2 emissions fell by a record 5.8% in 2020 because of lower primary energy demand, which fell by 4% year-on-year. This is unsurprising given that large parts of the global economy were under lockdown. However, as the global economy recovers, we are set to return to the status quo. In fact, primary energy demand in 2021 is expected to return to pre-pandemic levels, and the IEA is estimating that energy-related carbon emissions will rise by 4.8%, or 1.5b tonnes CO2 in 2021 - the largest increase in emissions since the Global Financial Crisis. Emissions will still be below 2019 levels this year, but it is only a matter of time before they hit record levels once again.

However, the trends we are seeing are very clear. There is a move towards a more sustainable world and therefore a growing share of renewables used in the global energy mix.

The US has also rejoined the Paris Climate Agreement, following the change in administration, and as such the US is targeting to reduce greenhouse gas emissions by 50-52% below 2005 levels by 2030.

In Asia, the region is also stepping up and getting more serious about cutting emissions. China, Japan and South Korea have all announced long-term targets to reach net zero. In 2021, a number of industries in China have already come under pressure to start reducing emissions, particularly the aluminium and steel sector.

In the series of articles that follow, we will be looking at what the energy transition means for metals demand. We will focus on road transportation and power, given that these two sectors will be key to future demand growth. Instead of forecasting, we will carry out scenario analysis due to the level of uncertainty ahead. In addition to looking at opportunities from the expected demand growth, we will also discuss the need for the metals and mining industry to tackle its own carbon emissions. Finally, we will look at more sustainable projects and investments from the sector, and how green debt transactions from the metals and mining sector compare to other industries.

Metals the winner from the energy transition

Clearly, there is much more work needed to hit ambitious long-term targets, and in order to reach these, we will need to see significantly more investment in renewables. This is set to benefit a range of metals, as countries revamp their energy infrastructure. Wind and solar will drive growth in metals demand, while increased variable renewable energy also means the need for more metal-intensive energy storage solutions. Increased electrification of both industry and transportation will mean the need for further investment in the power grid, which will prove beneficial for aluminium and copper demand.

While the transition will benefit a large part of the metals complex, in this series of articles we will focus on the demand outlook for copper, aluminium, nickel, cobalt and lithium. These are metals that will be used heavily in the electrification of transportation and industry, as well as in renewables and stationary energy storage. The outcome could be very different from what our scenarios show, particularly given that technology advances mean that the raw materials used in future to help with the energy transition could be different to what is currently used.

Metals demand is set to benefit under all three scenarios we look at, however, clearly for the most bullish outlook we would need to see the right balance of government policy and innovation from the private sector. Under our most aggressive scenario 'Fast Forward', copper demand from road transportation and the power sector grows from around 4mt currently to 16.7mt by 2040. While our most pessimistic scenario sees copper demand from these two sectors growing to around 8.7mt by the end of the period. Aluminium demand from these sectors grows from a little more than 20mt to around 38mt under our most aggressive scenario. Also under this scenario, nickel, cobalt and lithium see average annual demand growth from the two sectors of 16.8%, 14% and 13.6%, respectively, between now and 2040. 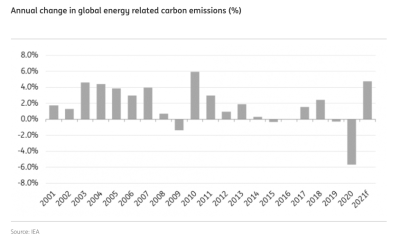 The metals industry needs to deal with its own emissions

While metals will play a crucial role in the energy transition, it is important to remember that the metals industry is energy intensive and a large emitter of carbon emissions. Greenhouse gas emissions from the aluminium industry are estimated at a little more than 1b tonnes, which works out to 11.5t per tonne of aluminium (primary aluminium emissions are around 15.9t per tonne of aluminium produced). Still, there are large differences between producers depending on the source of energy used for power generation. Smelters that use coal to generate electricity clearly have significantly higher emissions than smelters which use natural gas or renewables. Given the large share of global output that sits in China, coal makes up a little more than 60% of the power mix for smelters globally.

So while there is plenty of opportunity for the metals industry in the years to come, it is crucial that the industry tackles the issue of its own emissions. Some in the industry are making strides to cut emissions, with the prominence of 'green' aluminium growing. Government policy will play an important role, with producers that fail to rein in emissions penalised through some form of carbon tax. The EU already has a well-established emissions trading system, while China has recently launched its own. For now, China's system only incudes the power sector, however more sectors will be included gradually over time. Such policy would drive the industry to find new production technologies which are lower emitting. Harmonisation of carbon taxes around the globe would also prove beneficial, as this would mean that producers have to find solutions to lower emissions, rather than setting up operations where carbon emissions come under less scrutiny. The EU is trying to combat this by implementing a carbon border tax.

Given the lower energy intensity of recycling, this will also play an important role for the industry to reduce emissions. For example, emissions from secondary aluminium are a fraction of that from primary production, at just 0.6t per tonne of aluminium produced, according to the International Aluminium Institute.

Recycling rates still have the potential to increase significantly. Aluminium sees one of the highest recycling rates, currently at around 76%, nickel is around 68%, while copper comes in at around 60%. Cobalt and lithium see much lower rates, with end of life recycling rates for cobalt standing at around 32% and less than 5% for lithium. These rates will undoubtedly increase as these two markets grow.

Increased recycling not only helps when it comes to lowering emissions, but will also help to meet the robust demand growth that is expected in the years to come.

Warren Patterson is the head of  Commodities Strategy at ING. This note first appeared on ING’s THINK.ING portal here.

Kazakh officials decline to confirm or deny death of Nursultan Nazarbayev
Perspectives | Why Uzbekistan does not fear a ‘Kazakh Winter’
INTERVIEW: Kazakhstan in crisis