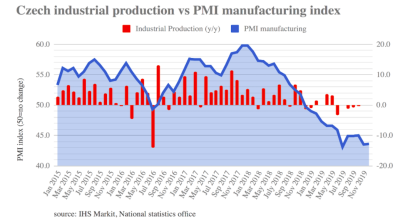 Industrial production in Czechia fell by 5.7% year-on-year in November raising fears of a recession
By bne IntelliNews January 14, 2020

Industrial production in Czechia fell by 5.7% year-on-year in November as the five year long boom comes to an end. Working day adjusted, the fall reached 3.2%, more than the market expected. This disappointing figure pushed Jan-Nov average growth into negative territory, after 3% growth in 2018.

Czech industrial production fell by 1.1% month-on-month in November. The year-on-year fall grew to 5.7% y/y. Adjusted for the effect of fewer working days, the year-on-year decrease comes to 3.2% y/y, still higher than the market expected. Average growth for domestic industry reached -0.3% between January and November last year and it thus fell into mild recession.

The main reason driver behind the weaker November print was manufacturing. Here saw significant falls in production of transport equipment, machinery, and vehicles. The weaker prints were relatively broad based. Car production fell 6.7% y/y (working-day adjusted: 3% y/y), having grown slightly in previous months. For all of 2019, car production average growth reached 1.4%, still a positive in the context of a noticeable drop in car production in Germany.

Some positive news is that German industrial growth ended above market expectations and grew by 1.1% in November, driven by production of capital goods and partly by construction (included in German industrial statistics).

Manufacturing itself accelerated by only slightly less (+ 0.9% m/m), mainly due to growth in car production. This grew by more than 3% m/m in November, after falling significantly in the previous two months. However, the year-on-year dynamics of German car production remain markedly negative, and the fall in car production in Germany will be near 10% in 2019. The more favourable November figures offer some hope that German industrial production has rebounded, which would be good news for domestic industry. Somewhat weak November new orders are tempering this optimism somewhat. We will have to wait a few more months to see the whether German industry has really rebounded.

Czech industry on the edge of recession

Czech industry will thus slow appreciably in 2019 and will be on the edge of a slight recession, after growing by 3% in 2018 and by 6.5% in 2017. Its performance this year remains relatively uncertain and will depend on further developments abroad. We expect continued stagnation. New orders grew by just 1.5% in 2019, their weakest y/y dynamics since 2009.

TURKEY INSIGHT: Moody’s warns of autumn peril
3 days ago
MITTELEUROPEAN INSIGHTS: Better $1.5bn from Russia or €1bn from the EU in the hand than $15-20bn in the bush?
3 days ago
COMMENT: Ukraine’s the Old Rotten System is alive and well
8 days ago
STOLYPIN: Whatever is happening to Putin?
11 days ago
FPRI BMB Ukraine: Lawmakers’ promises, one year later
15 days ago