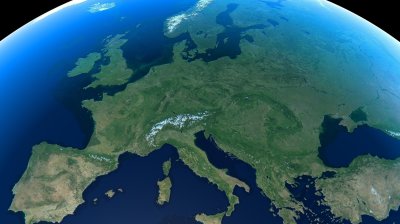 Many of the emerging markets of CEE have come far enough that they are using developed market tactics to fight the crisis, such as QE programmes
By Rafal Benecki et al of ING THINK May 12, 2020

What is behind the magic of high numbers of anti-crisis programmes to combat the economic fallout from coronavirus (COVID-19)? Some CEE countries can afford policy responses like developed markets as their central banks kick-start QE support programmes.

Above and below-the-line rescue measures

Central and Eastern European countries are part of a select emerging market group, which can afford developed market-like policy responses to the COVID-19 recession: a large fiscal stimulus backed by central bank asset purchases on the secondary market to prevent side-effects of higher public borrowing needs, i.e. mitigate tightening of financial conditions, which would limit the positive impact of fiscal impulse.

The discretionary policy response to the pandemic can be split into:

Above-the-line measures: direct support for companies and households through new spending, cuts in tax or social security contributions moratoria - they have an impact on budgets and debt immediately.

Below-the-line measures: public loans and capital injections and guarantees to firms in trouble. They affect fiscal accounts indirectly and partially.

Hungary announced the biggest anti-crisis response package of 13.6% of GDP, of which 60% is liquidity support, and the remaining 40% is direct fiscal support (the highest relaxation of tax burdens in CEE).

The National Bank of Hungary is starting QE with Govies purchases on 5 May. In 2020, QE may reach up to 3.2% of GDP and cover 16% of gross public borrowing needs. In the past, mortgage and corporate bonds were already on the list of eligible assets purchased by the central bank, and these programmes are likely to be extended.

Czech Republic: Guarantees-based package and the most conservative central bank

The Czech Republic pledged to deliver the second-biggest anti-crisis programme in the region, of 12.3% of GDP.

It seems to be high, but it requires much red tape, so it starts slowly and does not serve as fast as expected. Also, public guarantees constitute 70% of the programme, while direct fiscal support amounts to just 3.2% of GDP. The programme does not benefit from support from the central bank in terms of QE.

The Czech national bank remains the most conservative in the region, as it has cut interest rates but claims that QE is the last-resort measure, which can be deployed in the case of a prolonged recession, the threat of deflation or financial stability risk.

Poland ranks third in this comparison, with the announced measures totalling 11.3% of GDP.

But the fiscal component encompassing direct support is the most generous in the region. The Polish government took the boldest redistributive measures, with additional discretionary spending on protecting jobs, sustaining incomes for households and supporting firms. Overall, above-the-line fiscal measures should reach 6.5% of GDP. In relation to GDP, this is the highest fiscal stimulus not only in CEE but in Europe as a whole.

Such a fiscal shield would not be possible without a large central bank programme of asset purchases, which may reach 8.4-10.4% of GDP according to our estimates and should be the highest in the region. So far, a large expansion of central bank balance sheet has not affected the currency. We explain it by a strict liquidity control - money printed is tightly managed by the state-owned bank BGK, so shorting the zloty isn't easy. NBP cut interest rates aggressively and frontloaded aggressive POLGB purchases, which led to a drop in T-bond yields.

More than half of the projected net public borrowing needs in 2020 should be satisfied by other bonds aside from Polish government bonds, issued by BGK and the Polish development fund. They should be bought by local banks, and then to a large extent purchased by the central bank, and by foreign investors looking for extra spread vs expensive POLGBs. Strong central bank support for the government bonds market also prevents adverse currency reaction to high QE.

Romania's anti-crisis programme of 3.2% of GDP, of which 2% of GDP are public guarantees, is relatively small. The direct support is just 1.2% of GDP because the government conducted pro-cyclical policy in the past and brought the deficit to a high level. It could only add a small fiscal stimulus now.

The National Bank of Romania started its first-ever QE programme in April, but its scale is limited due to worries about fragility of the leu.

Russia: Modest anti-crisis response with no QE in sight

The Russian anti-crisis response has been modest so far, just 3% of GDP.

In this package, 2% of GDP is spending (of which only 1% of GDP are new outlays) and another 0.5% of GDP are tax breaks. The public guarantee programme is just 0.5% of GDP.

The public support is targeted - only the most affected individuals and businesses are eligible. We expect a new wave of support measures to be announced soon, totalling around 1% of GDP, evenly split between state guarantees and public spending.

Quantitative easing doesn't seem to be on the cards in Russia, but the central bank is likely to continue easing monetary policy from the current 5.5% to 4.5-5.0%. Also, it is ready to provide refinancing loans to banks if required.

CEE's anti-crisis response, as percentage of projected GDP in 2020, unless otherwise indicated 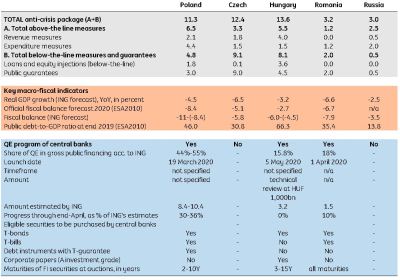