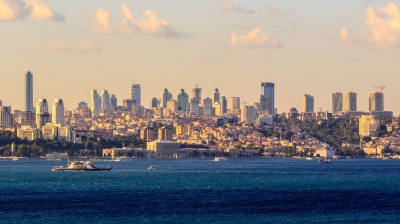 Levent business district skyline as seen from the Bosphorus strait in Istanbul.
By Akin Nazli in Belgrade August 15, 2019

The rollover ratio stood at 49%.

Details of the $305mn syndicated loan were released on August 8 just prior to Turkey going into a long public holiday period.

ING Turkey ranked as Turkey’s 12th largest lender by assets, among a total of 47 local lenders, with a total asset volume of TRY60bn (share of Turkey banking industry assets around 2%) as of end-Q1, according to latest data from the Turkish Banks Association (TBB).

Higher costs
ING Turkey’s costs compared higher than the Libor+200bp and Euribor+200bp that Turkiye Sinai Kalkinma Bankasi (Industrial Development Bank of Turkey, or TSKB) obtained in July for a 367-day syndicated loan in tranches of €97.5mn and $67.5mn.

The autumn season for Turkish lenders’ syndicated loan renewals will be launched in September by private lender Akbank, as per usual.

This year, the spring renewals season was also in the spotlight given the pressure caused by new waves of economic turbulence that began prior to the local elections held on March 31.

Turkish lenders’ scheduled credit repayments across the next 12 months amounted to $40bn at end-May, according to the latest data from the central bank.