Inflation in Slovakia up by 2.3% in February 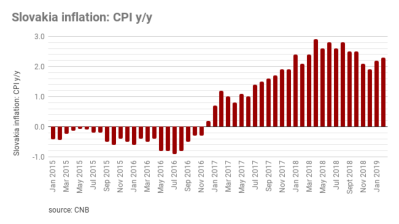 Year-on-year inflation in Slovakia increased by 2.3% in February, with core inflation amounting to 1.9% and net inflation at 1.7%, the Slovak Statistics Office reports
By bne IntelliNews March 18, 2019

Year-on-year inflation in Slovakia increased by 2.3% in February, with core inflation amounting to 1.9% and net inflation at 1.7%, the Slovak Statistics Office reported on March 14.

"In February compared with January, consumer prices increased by 0.2% in total. Prices rose in the divisions of transport by 1.1%; restaurants and hotels by 0.6%; health by 05%; alcoholic beverages and tobacco by 0.4%; housing, water, electricity, gas and other fuels. … Prices of clothing and footwear dropped by 0.9%. Prices of furniture and furnishings, household equipment and routine household maintenance; communications; education were at the level of January,“ the statistics office reported.

“According to the data from the Statistics Office, consumer prices in Slovakia increased by 0.2% on average in February, with the dynamics of their y/y growth accelerating from 2.2% to 2.3%. The acceleration of the y/y growth in prices has to be attributed in particular to the statistical base effect on food prices and the correction of oil prices on world markets, while the slowdown in demand inflation slightly surprised,” said UniCredit Bank Czech Republic and Slovakia analyst Lubomir Korsnak, the Slovak News Agency reporting.