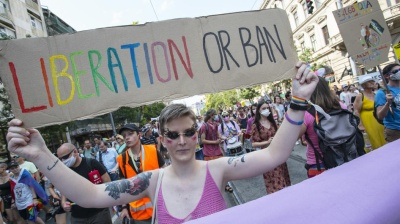 This year’s Budapest Pride attracted a record number of attendees as the LGBT community and sympathisers stood up against the ongoing hate campaign of the government. Organisers estimated that some 30,000 people attended the march on Saturday, creating a festive and jubilant mood. A couple of dozen people held a demonstration against the march, but they were sealed off by police.

Organisers said the march was also a protest against the new homophobic propaganda law, the constitutional stigmatising of transgender people, the ban on legal conversion and homophobic, hateful public discourse.

The European Commission has launched an infringement procedure against Hungary over its new so-called "child protection law"and called on Budapest to amend legislation violating EU rules. The new law, seemingly inspired by a similar Russian measure, bans the depiction of homosexuality in schools.

Under growing pressure from the Pegasus wiretapping scandal and the suspension of recovery fund money from Brussels, the radical rightwing Fidesz government has launched a new communication frontline by announcing a referendum on the controversial anti-LGBT law last week.

Observers say Hungary’s nationalist prime minister is making homophobia a campaign theme. Opposition parties say Orban is trying to divert attention from the mishandling of the pandemic, which cost 30,000 lives in Hungary, and the controversial Fudan University project, which is unpopular even among Fidesz voters.

Besides the homophobic anti-LGBT act, the government banned single and same-sex couples from adopting a child and said no to gender change using its extraordinary powers during the height of the pandemic. Parliament, ruled by a two-thirds majority of Fidesz, amended the constitution banning the marriage of homosexuals.

One of the organisers said the LGBT community has been impacted by an "unprecedented disenfranchisement" after the government approved the anti-LGBT law”. Adam Csikos stressed they would not allow themselves to be treated as "second-class citizens".

Speakers at the Budapest Pride included Vladimir Luxoria, who became the first transsexual MEP. "We do not want to convert heterosexual young people gay or trans. We want children not to grow up to be hateful adults," they said.

The government’s latest communication offensive accuses Brussels of turning down Hungary’s RRF funding because the government would not allow LGBT activists in schools and kindergartens.

Budapest mayor and prime minister candidate Gergely Gergely voiced his support to the gay community. "I’m a heterosexual, I belong to the majority. But I know that belonging to the majority is not a privilege, it is not a power to be abused. Although we’re not all the same, we are equal",  he said.

A giant rainbow flag as well as smaller ones were carried by marchers. Banners of opposition parties could also be seen among the crowd. Leading politicians of the opposition also took part in the March.

One banner read Liberation or Ban, a pun referring to PM Viktor Orban and one depicted the prime minister’s cabinet chief. When asked at the weekly presser whether Fidesz politicians would participate at the Pride, Gulyas said no and argued that "as far as I know there is no overlap". After his comments, journalists burst out in laughter.

RTL Klub reached out to Fidesz, which only issued a short comment after Budapest Pride. "We are not commenting on festivals".