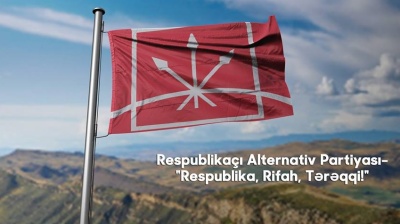 The Central Election Commission of Azerbaijan’s says there are as many as 62 registered political parties in the country, but Natig Jafarli, executive secretary of Republican Alternative (ReAl), wants his party to stand out from the crowd. ReAl, he says, is ambitious to become recognised as the opposition party distinctly primed to debate the governing New Azerbaijan Party.

Nevertheless, Jafarli does not consider that moving to a two-party system is possible for Azerbaijan as yet. "Each country's own experience, historical conditions and many other factors are taken into account and influence the establishment of party systems," he says. "Take, for example, the US, where there is a two-party system. America's electoral and governance system is completely different. This state is a union of separate states. Because local self-government is very strong, different mechanisms have been developed there. Each state has the ability to behave like a small country, has its own parliament, government, governor. Thus, historically, there have been various attempts to establish new parties in America. But Democrats and Republicans began to develop in two directions. The hegemony of these parties was built on established American traditions," he added.

Jafarli continues: "It is not possible to say that either the ruling and opposition parties in Azerbaijan are built on an ideological platform. It’s more that they are political parties formed around a person or multiple persons.

“When you look at the ideological lines on paper, all parties, except the Communist Party, are similar. They all have the same thing written through them—a centre-right, liberal party model. But the ruling party does not act as centre-right. They prefer a model with a more leftish and state-based economy. Because we see that the state has enough economic opportunities, the state has hegemony in this area. Therefore, the transition to a bipartisan system is not yet possible in our country, as neither the ruling party nor the opposition parties are formed on an ideological platform."

Jafarli observes that, first of all, at least ideologically, the parties need to differ from each other to put in place foundational reasons for a transition to a two-party system: "Uniting against something has never been effective [here in Azerbaijan]. There have been at least 11 attempts to form an anti-government coalition since independence. All of them failed.

"Successful models can be made possible by merging around an idea. A union against something or someone is never successful. Due to the immaturity of the parties themselves, the transition to a two-party system in Azerbaijan is not yet possible."

The key issue for the normalisation of the party system in Azerbaijan is introducing an electoral system with proportional representation, ReAl’s Jafarli contends. He says: "The introduction of proportional elections with party lists will lead to the collapse of political parties in Azerbaijan that do not have a name. For example, if the threshold is not much, but 5-10%, more than 20 political parties will fail in the first election. They will either join other parties to stay afloat or be removed from the political scene altogether.

"Therefore, one of the main conditions for us at the initial stage is the existence of parties formed on ideological foundations and the transition to a proportional electoral system. After that, I think other issues will be resolved naturally."

Stressing that ReAl is one of the first parties to be built on a purely ideological platform with a programme, the politician said that the party is not based on the individual: "Tomorrow, the chairman of this party may be another person, the board will be completely changed, and so on. As a party, we are ready for this.

"I think that in the event of a proportional electoral system, there would be only six or seven parties in Azerbaijan that could stay on their feet. This will lead to the formation of a coalition culture in coming years."