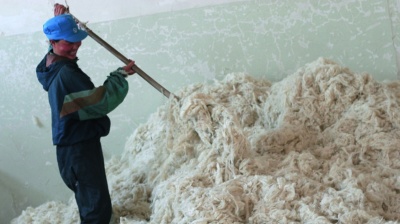 A Mongolian worker sifting long cashmere fibres. “The overgrazing in Mongolia stems from soaring global cashmere prices amid a lack of land-use regulations or pasture management standards,” the IMF says.
By Kanat Shaku in Almaty December 16, 2019

Mongolia’s livestock industry, once the primary engine of the country’s economy, is facing threats from climate change and overgrazing, according to a report from the International Monetary Fund (IMF). The national and regional costs to economic growth and inequality will continue to grow without prompt policy action, it added.

Mongolia’s livestock industry accounts for nearly 90% of agricultural production and employs 25% of Mongolians, providing more jobs than any other sector. Major challenges are rising in the sector as hotter and drier summers along with massive overgrazing have resulted in sharply accelerating land degradation. The damaged land, in turn, harms the food supply for the livestock and leaves animals poorly prepared to survive increasingly frequent extreme bouts of cold weather.

Land degradation and desertification have also contributed to the formation of “yellow dust storms”, which contribute to rising health and economic costs. The dust storms also plague other countries in the East Asian region, including China, Japan, and South Korea.

“While it is difficult to reverse the effects of climate change, particularly in the short run, policies to prevent overgrazing are feasible and could have a positive and lasting impact on the sector. This is important because a stronger and more sustainable livestock sector would help Mongolia diversify away from mining and achieve more inclusive economic growth,” the IMF said.

“The overgrazing in Mongolia stems from soaring global cashmere prices amid a lack of land-use regulations or pasture management standards,” the Fund said. “Since 1990, the number of animals has tripled to 70 million, vastly exceeding the carrying capacity of the land. IMF analysis finds that the percentage of livestock deaths following cold spells is greatest in the provinces that had the largest increase in their livestock population. In total, these losses of wealth can reach 12 percent of GDP during extreme winters.”

The Mongolian government has attempted to stem the land degradation with official livestock targets in the National Livestock Programme by setting limits on the number of livestock, which reflect the carrying capacity of the grasslands. The measures, however, have gone mostly unheeded and actual livestock numbers are twice the required levels.

“In its most recent assessment of the Mongolian economy, the IMF recommends various economic policies. First, reintroducing a pasture tax (with an exemption for small/medium herders) could help reduce herd size. Second, incentives to boost quality of animal products—for example, training herders on techniques that improve the quality of the cashmere, can improve profit margins and reduce the reliance on large herds,” the Fund said. “And third, increasing the size of the meat industry—livestock for consumption rather than just cashmere—would provide a natural limitation on herd size and further incentivize herders to focus on quality over quantity.”

“Mongolia’s regional neighbors can also play a role via trade policy, which could encourage better land-use management policies. For example, helping Mongolia expand the external markets for its meat industry would both increase Mongolian incomes and reduce land degradation via smaller herds,” the Fund added.