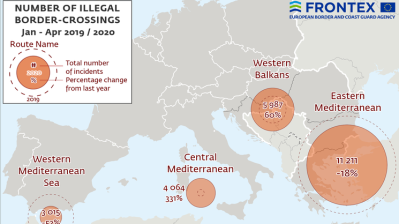 Illegal border crossing to the European Union countries via the Western Balkans jumped by 60% year on year in the first four months of 2020, the European Border and Coast Guard Agency, Frontex, announced.

The Balkan migrant route was closed in 2016, but smuggling of migrants has never stopped entirely. The main route ran from Greece via North Macedonia and Serbia, and then expanded to Albania, Montenegro and Bosnia & Herzegovina even though the situation there was not critical.

However, in April there were fewer than 100 illegal border crossings recorded on this route, down by 94% from the previous month as a result of the coronavirus (COVID-19) pandemic, Frontex said on May 12.

This is the lowest number of illegal immigrants entering the EU in any month since 2009.

The total number of illegal border crossings into the EU during this period was 26,650, approximately the same as in January-April last year.