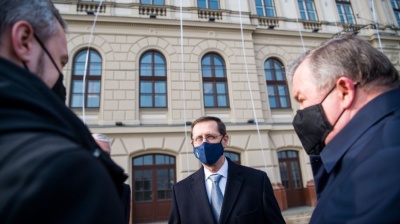 The International Investment Bank (IIB) inaugurated its new headquarters in Budapest in Lanchíd Palota, a landmark Neo-Renaissance style palace next to the iconic Chain Bridge on February 19.

Speaking at the ceremony, Finance Minister Mihaly Varga said the relocation of the bank's HQ to Budapest from Moscow in 2019 had helped to raise Hungary's international profile as well as support its economic players.

IIB is the only international development bank of the five operating in Europe to have its HQ in the CEE region. At present, it employs 60 in Budapest.

The IIB has been active in providing funding to local farms. So far laid it has out €400mn since 2015, when Hungary rejoined the bank. Last October IIB unveiled its largest investment, a €100mn loan facility to state utility giant MVM to finance the modernisation and development of the natural gas energy infrastructure.

Hungary is now the second-largest shareholder in the multilateral investment bank with a 17.3% share after Russia.

The country's share of the loan portfolio was about 6% in 2018, before the bank relocated its HQ. It was around 14% last year.

Last year IIB became the first multilateral bank to launch two forint-denominated bond issues on the Budapest Stock Exchange. It participated in the issuance of the first sovereign green bond in June, and then became one of the largest investors in the first green corporate bond issued by CPI Hungary Investments in August.

The European Bank for Reconstruction and Development (EBRD) is providing a €20mn loan to UniCredit Leasing Serbia to support small and medium sized enterprises (SME's) that want to invest to boost ... more

Armenia’s private sector will obtain new resources for green financing thanks to a $6mn financial package put together by the European Bank for Reconstruction (EBRD) and ... more

The World Bank’s Global Infrastructure Fund has provided a $350,000 grant for the preparation of a preliminary feasibility study for the construction of the 340-kilometre Tashkent-Andijan highway ... more