Hungary’s industry held back by supply woes in May 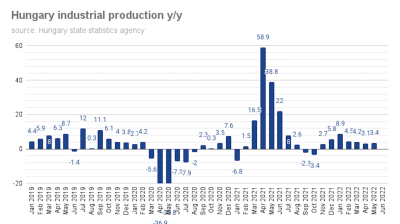 The output of Hungary's industrial sector increased by 9.4% y/y in May, the Central Statistics Office (KSH) said in the first reading of data on Wednesday. KSH noted that there were two more workdays during the month than in the base period. Adjusted for that difference, output rose 3.4%.

On a monthly basis, output rose a seasonally- and workday-adjusted 1.4%, after two months of declines.

Most manufacturing sector segments contributed to headline growth. The output of the biggest segment, vehicle production, rose "by a smaller degree", while output of the computer, electronics and optical equipment segment and the food, drinks and tobacco products segment increased "by a larger degree", KSH said.   Detailed figures will be released next week.

In the last two months the automotive segment, which accounted for a fifth of manufacturing sector output, was impacted by the semiconductor shortage and supply chain problems, but the weaker performance of the vehicle makers was offset by other sectors.  The output of the electronics sector grew at a faster pace than the headline figure.

Industrial output beat expectations in May and could return to the growth path in the coming months, but disruptions in supply chains remain a significant risk, just like rocketing energy prices, Magyar Bankholding senior analyst Gergely Suppan noted. Thanks to new capacity investments and a lower base, industrial output could grow by 5-6% in 2022, down from 9.6% a year ago.

Manufacturers are slowly finding alternative sources for supply chains impacted by the war in Ukraine. June industrial data needs to be strong if the sector isn't to weigh on Q2 GDP growth,  ING Bank chief analyst Peter Virovacz said. Outlooks for the quarter are "rather cautious" but predicted full-year GDP growth of "well over 5%".