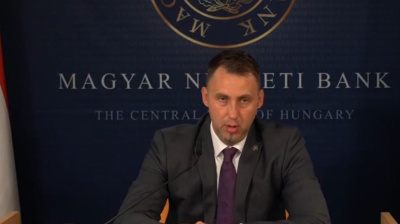 Hungarian central bankers surprised the markets with a robust 185bp  hike in the base rate at the monthly policy meeting on June 28, reaffirming the bank’s willingness to fight inflation and prop up the ailing forint. Analysts had been expecting a 50-100bp increase. The O/N deposit rate was also increased by 135bp to 7.25%, and the O/N and the one-week collateralised lending rates were raised by the same clip to 10.25%.

Before the rate-setting meeting, some analysts predicted that the Hungarian National Bank (MNB)’s credibility was on the line after it slowed down the pace of tightening from 100bp in March and April to 50bp last month. Central bankers argued that the optimal interest rate level could be reached by raising rates in smaller increments.

However, the decision led to a sell-off in the forint, which has been of the weakest currencies in Europe, losing 12% of its value since the war. The government’s fiscal consolidation measures did little to ease worries, and the widening current account deficit and the lack of agreement with Brussels on the transfer of EU funds left the forint exposed to external market movements more than its peers.

Hungary was also ranked as one of the most vulnerable emerging market countries in terms of the risks stemming from rising financing costs, according to rating agency S&P.

Maintaining tighter monetary conditions for a longer period is warranted to manage increasing second-round inflation risks resulting from persistently negative supply effects, according to a statement issued after the meeting.

Policymakers stressed the need to close the gap between the base rate and the one-week deposit rate at 7.25%, which so far has been the effective rate. The quasi-dual interest rate regime has puzzled some investors.

The monetary tool was introduced a year ago to allow the central bank to adjust flexibly and quickly to market changes on a weekly basis. The MNB unexpectedly raised the rate by 50bp on June 17 to lend support to the currency, but the impact was short-lived.

Today’s rate decision came amid fresh forecasts showing that inflation will continue to rise and remain above the central bank's target in 2023, Deputy Governor Barnabas Virag told reporters in an online briefing. The MNB's latest forecast sees inflation retreating to its 3% target only in 2024.

Virag defended MNB’s position, fielding a question suggesting that the MNB was behind the curve, saying that Hungary’s central bank was among the first in the EU to embark on a monetary tightening cycle.

The central bank will continue with its rate tightening cycle to anchor inflation expectations and mitigate second-round inflation risks, he added.

The MNB also revised its GDP target upward from 2.5-4.5% to 4.5-5.5% but noted that growth will slow down from H2. Growth will decelerate to 2-3% in 2023 compared to the March forecast of 4-5% due to slower growth in investments and household spending. Details of the inflation report will be released on Thursday.

Virag said the MNB will extend the use of the foreign exchange liquidity providing swap facility from July to suck liquidity out of the banking system.