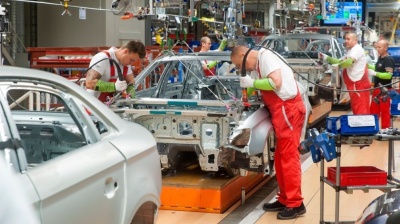 The Hungarian economy decelerated from a 5.3% annualised growth in Q1 to 4.9% y/y in Q2, according to preliminary figures from the Central Statistics Office (KSH) on August 14.

The figures were above the 4.7% median estimate. The calendar-adjusted data showed growth of 5.1%, down from 5.2% in the previous quarter, the highest in the EU. Romania and Poland came after Hungary with annualised growth of 4.6% and 4.1% respectively.

Economic growth in Q2 was higher than expected by most analysts as recent industrial and retail sales data suggested slower growth between April and June, analysts said.

Market-based services, the construction sector and industry contributed the most to growth in the second quarter of 2019, according to the short summary from KSH. The detailed breakdown of sectors will be known in the second estimate due out on August 30.

Hungary's economy is expected to perform well even in the second half, as H1 growth was faster than what the government had forecast in the updated convergence programme, said Finance Minister Mihaly Varga after the data was released. In the first half of the year unadjusted growth was 5.1% compared to 4.8% in the same period last year.

The government projected 4% growth in its economic forecast sent to Brussels in the spring, but the recent figures suggest that growth could come to 4.3-4.4% this year. The government's cautious approach may be attributed to external risks, such as sluggish growth on Hungary’s export markets, the trade war and Brexit, analysts said.

Growth would have been 1.6pp lower without government measures, Varga added. He named the government's competitiveness programme, the six-year wage agreement, the home subsidy scheme and the stimulating investment environment.

Unlike in previous growth cycles, GDP growth was not fueled by rising debt, he added.

The pace of growth could slow further and for the year GDP could grow by around 4.5%, which is above the National Bank’s 4.3% forecast and the government’s official 4% target.

Takarekbank highlighted the role of foreign direct investments in boosting growth besides EU funds and domestic consumption. Government measures helping families and the economy could offset negative external effects in H2, leading to an average GDP growth of 4.8% for the year, said analyst Gergely Suppan.