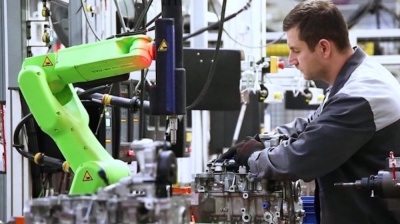 The output of Hungarian vehicle manufacturing, the engine of industrial growth, plummeted 33.7% y/y in August as the global semiconductor shortage impacted factories, the statistics office (KSH) said in a second reading in October. KSH confirmed that headline industrial output rose 2.6% and by 0.6% when adjusted for the number of workdays. On a monthly basis, output fell a seasonally- and workday-adjusted 2.7%.

The decline in output of automotive industry companies, which accounted for 17% of total manufacturing output in August, accelerated from a 6.7% drop in July. The global chip shortage has forced Daimler’s plant in Kecskemet to cut production in August.

After a dynamic recovery following the reopening, industrial output seems to have hit a wall, ING analyst Peter Virovacz said in a note after the preliminary data.

The combination of transport problems, supply chain difficulties and labour shortages is now an effective constraint on the ramp-up of output, he added.

The output of the computer, electronics and optical equipment segment, accounting for 12% of manufacturing, slipped 3.7% y/y in August.

The order stock in segments of the manufacturing sector tracked by KSH grew 10.8% y/y at the end of August and new order volume fell 12.5% as new domestic orders grew 6.5%, but new export orders declined 15.7%.

The outlook of the sector is clouded by skyrocketing energy and raw material prices eroding the profitability of the sector. Hungarian companies are facing rising labour costs, analysts noted.

Industrial output could be hit further by factory shutdowns in September, Erste Bank noted, adding that Q4 GDP growth could be subdued as the external environment becomes less supportive.