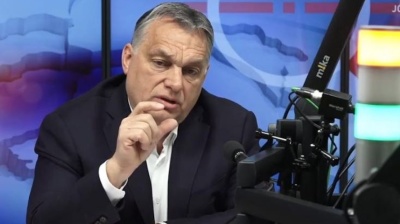 Prime Minister Viktor Orban announced a curfew for the entire territory of Hungary from March 28 until April 11. People are only allowed to leave their homes to go to work or to run essential errands, Hungary's right-wing leader said in an interview with public radio on March 27. Hungary has 300 confirmed cases, which is due to the lack of adequate testing. The government expects the epidemic to peak around June or July.

Hungary introduced a state of emergency on March 11, first banning all outdoor and indoor gatherings of more than 500 and 100 respectively. Schools and universities were shut down a few days later. No entry into Hungary was allowed from Italy, China, South Korea or Iran, and controls were reinstated at the Schengen borders.

On March 16 Hungary shut down its borders and allowed only Hungarian citizens to enter. All public events were scrapped, but cafes, restaurants, and non-essential stores were allowed to be open until 3pm. Pharmacies, tobacconists, grocery stores and petrol stations can remain open without restrictions.

The government has launched stay-at-home campaigns in the media targeting mostly the elderly, but the movement of citizens has not been restricted until now.

Orban said the restrictions introduced so far have been effective as the number of social contacts was reduced to a tenth of what it was before. However, traffic in some Budapest districts was dense and many pensioners were seen walking around parks and shops without any protective gear.

From Saturday grocery shops and pharmacies will be open to people above 65 years of age between 9am and 12 noon every day. Others will not be allowed in those shops during that period,

The decree states that the number of social contacts should be kept to a minimum and it calls for keeping a 1.5-metre distance in public. Only employees are allowed to be in restaurants and other places of hospitality services. Food delivery and takeout orders are still possible.

Police will be enforcing these restrictions with other law enforcement agencies, according to the decree. Fines up to HUF500,000 (€1,410) may be imposed on people breaching quarantine rules.

The number of confirmed coronavirus cases in Hungary has reached 300, the government website koronavirus.gov.hu said on Friday. This is a daily increase of 39. The number of deaths remains at ten.

Of the 300 confirmed cases, 10 are Iranian, two are British, one is Kazakh, another Vietnamese, and the remaining 286 are Hungarian, it said.

The epidemic in Hungary is at the stage of transmissions in communities, medical officials said, adding that infected people can be found all over the country. The number of full recoveries has gone up to 34 from 28. There are 84 people are in quarantine and a total of 9,275 test samples have been taken since the start of the epidemic.

The epidemic is expected to peak in Hungary between June and July, cabinet chief Gergely Gulyas announced on Thursday. Estimates of virologists, epidemiologists, and mathematicians range within wide limits. However, it is clear that we have to be prepared for months to increase the number of infections and diseases with the spread of the new coronavirus, he added.