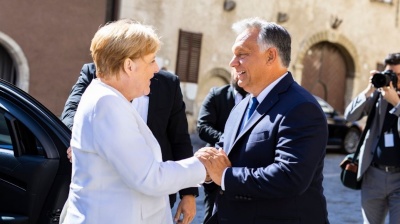 German Chancellor Angela Merkel thanked Hungary for its role in bringing down the Iron Curtain at a joint commemoration with Hungarian Prime Minister Viktor Orban held on August 19 on the 30th anniversary of the Pan-European Picnic in the western Hungarian town of Sopron.

It was their first bilateral meeting since July 2018 when Orban made his first visit to Berlin since 2015. The anniversary came as German-Hungarian relations have cooled. Orban has been an open critic of Merkel's refugee policy, while Berlin has expressed concerns over Orban's effort to establish an "illiberal" democracy and his pro-Russian stance.

The two leaders' positions on migration could not be more contrasting, as Orban was the first among EU leaders to vehemently reject the mandatory allocation of refugees, which has gained him support in Hungary and a third successive supermajority win for his Fidesz party. Merkel accused the Hungarian leader of failing to respect "humanity" with his anti-migrant strategy.

On the other hand, economic ties are stronger than ever. Germany is the largest investor in Hungary and bilateral trade reached €54bn last year, which is 25% of the value of Hungary's external trade.

On Monday, however, it was all about commemorating the historic events that took place 30 years ago. The opening of borders in the summer of 1989 gained Hungary enormous respect and prestige in Germany. The father of German reunification, the late Chancellor Helmut Kohl said in his book “Out of Concern for Europe” that "it was the Hungarians who removed the first stone from the Berlin wall."

In the past few years, efforts had been made by state-funded think tanks and pro-government media to lessen the credit given to reformist Communist leaders such as former Hungarian foreign minister Gyula Horn or the last prime minister Miklós Nemeth in the transition process, but it still remains one of the few issues that unite Hungary's divided political culture.

Merkel and her Hungarian counterpart attended a service at the Protestant church in Sopron on Monday morning. Merkel praised Hungary's role in ending the division of Europe and creating German unity. She recalled the events 30 years ago when opposition politicians and leaders of the Pan-European Union planned to celebrate European peace by symbolically opening the Hungarian-Austrian border divided by the iron curtain for a few hours.

News of the event quickly spread among East German citizens vacationing in Hungary, who made their way to Sopron for freedom, Merkel said.

It was the first time that a border of a Central European communist state was opened to citizens of Eastern Bloc states. This allowed nearly 1,000 East Germans to flee to the West that day. This is regarded as a milestone event in the momentous year of 1989, leading to the fall of the Communist regimes in Eastern Europe and the Berlin Wall, even though the borders remained closed for another three weeks.

Merkel began the joint press conference with Orban expressing her gratitude for the opening of the frontier thirty years ago. As he said in his solemn speech, the event thirty years ago is a good example of "how much we Europeans can achieve if we courageously stand up for our indivisible values.”

Hungary has always promoted the reunification of Germany as a stepping stone for both countries into Nato and the EU, Orban said, adding that even at times when the continent was divided “we knew there was always only one Europe”.

While many see a huge contrast between the opening of the borders and the fall of the iron fence in 1989, and the barbed fence erected recently by Hungary on its southern borders, Orban defended this by saying that 30 years ago the walls were demolished for Europeans to live in peace and security and borders fences are needed for the same reasons today.

Orban also took time to praise Merkel, saying that "Hungarians have great respect for the chancellor who has led the largest and strongest country in Europe for 14 years".

She has also laboured to ensure cooperation among European nations and the reunification of Europe. "We tip our hats before hardworking and successful ladies,” he said.