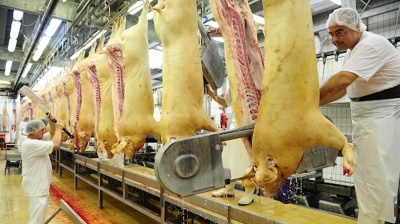 Hungary's leading slaughterhouse reports losses due to the rising costs
By Tamas Szilagyi in Budapest June 9, 2020

Rising live pork prices due to the swine fewer have hurt Hungarian meat processors. MCS Vagohid, one of the country's largest slaughterhouse reported a HUF5bn loss in 2019 and HUF10bn since it began operations in Mohacs (southern Hungary) three years ago, local media reported on June 8.

The facility, a unit of agrobusiness holding Bonafarm, owned by OTP CEO Sandor Csanyi, is operating at 90% of its capacity. The facility located in Mohacs (southern Hungary) was inaugurated in April 2017 from a greenfield investment of HUF24bn.

Around three-quarters of the standard-weight hogs processed at the slaughterhouse come from farms of the Bonafarm group.

Although the government provided subsidies to promote pig breeding the number of hogs fell below 3mn last year. Six years ago it planned to double the livestock from 3mn to 6mn. The VAT on pork was cut from 27% to 5% in 2016.

MCS Vagohid revenue increased by HUF15bn to HUF63bn last year, of which HUF25bn came from exports, which means a two-fold increase from 2018.

The company processed 900,000 pigs and 50,000 sows, which means that the company operated full capacity with a single shift.

The sector was hit negatively by the swine fewer, which lifted live pork prices by some 40%. Coupled with the weakness of the forint, slaughterhouses' expenditures surged 50% more, said Tamas Eder, CEO of agribusiness Bonafarm. On the local market retail sales prices climbed 30%, far below the rise of costs.

Hungarian companies were banned from selling pork to China as cases of swine fewer were detected in wild boars.