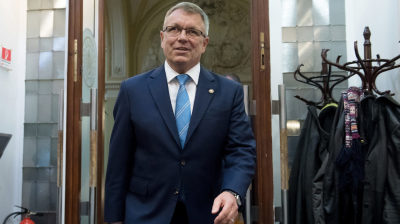 Hungarian National Bank (MNB) governor Gyorgy Matolcsy pressed for a new, sustainable housing policy strategy in an op-ed piece published on an online business portal on January 13. The central banker blamed the government for a lack of strategy that has contributed to spiralling prices.

Hungary's top central banker acknowledged that the government's housing policy, launched in 2014 was founded on successful crisis management, referring to the phasing out of Swiss franc-denominated retail loans amongst others.

The right-wing government of Viktor Orban introduced a series of policy actions to help out indebted home owners. In 2014, parliament adopted a law requiring banks to reimburse borrowers for fees and surcharges levied during the lending period that were deemed to be unfair.

In the same year, parliament adopted a law that obliged banks to convert foreign-currency mortgage loans into forint loans and allowed debtors to pay back their debt in a lump-sum. Foreign-currency denominated loans were later phased out.

Nevertheless, the housing policies launched in 2014 were "bleeding" from the start, Matolcsy said. He complained that no state body had been put in charge of the policy, the policy lacked a tried and tested strategy, and it applied lopsided tools that boosted demand but not supply, thus creating inflation.

There was no coordination with regional policy, transport developments, construction and building materials industry investments, and vocational training.

Family policy measures focused solely on stimulating demand, which have led to unsustainable market tendencies and accelerating property prices. House prices have grown by 104% nationwide since 2014, and 184% in Budapest. The renewal rate of homes is 0.4%, compared to 1.5% in Vienna.

"The failure is obvious. We need a vision, a strategy and a government organisation that will lead to a sustainable housing market. This will require the government and the home industry to reach a consensus on housing policy," he added.

Matolcsy emphasised that the transformation of housing policy is important because Hungary will need all the reserves it can muster this decade to keep economic growth 2pp above the EU average.